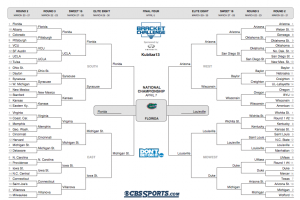 Two days in, Mercer’s win over Duke Friday was a big upset that shattered the chances of many participants in Warren Buffett’s NCAA Tournament Bracket Challenge vying for the grand prize.

Three players with perfect brackets remained early in the evening, but after additional late games, the standings showed no one in the running for the big prize.

The pick distribution showed 97.6 percent thought Duke’s Blue Devils would shut down the Mercer Bears. But even after a single game on the NCAA March Madness tournament’s first day, almost 84 percent of participants were already knocked out when Dayton upset Ohio State. ABC News

The chances of getting a perfect bracket vary depending on who you ask. The most modest estimates are something like 1 in a few billion. So I had a better chance of taking Beyonce from Jay-Z while I was still single than getting a perfect tournament bracket. Yeah, let that sink in for a moment. I got game and all, but I was also a junior in college with no money. Long story short, it wasn’t happening and neither is the billion dollars.

At least we can all shoot for winning the office pools. – AL