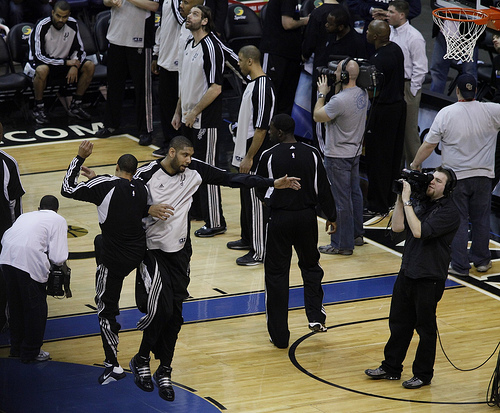 Tuesday, the Sacramento Kings were willed to victory by potent outings from their top three players – DeMarcus Cousins, Rudy Gay and Isaiah Thomas. Friday, though, the trio was much more subdued, which made taking on the full-strength San Antonio Spurs all the more difficult.

Gregg Propovich is prone to resting his stars in road games like Friday’s, but all of the team’s key players saw significant floor time in a 99-79 win.

“I loved how we defended, I loved the effort we put forth, but the first half it was the Tiago Splitter show and the second half it was the Marco Belinelli show,” said Malone of the Spurs’ ancillary duo, which combined for 28 points. “We had a hard time getting going. Rudy wasn’t making shots, Cuz and Isaiah struggled a little bit.”

The Kings put together an above-average defensive performance, even holding the Spurs to 38.7 percent shooting, but ebbs in offensive execution prevented them from establishing consistency and truly competing for a victory.

Sacramento fought to keep the game close, but San Antonio gradually pulled away and in the fourth quarter it capitalized on superb execution to wrestle away the game. The Kings adjusted defensive rotations after a sloppy start, but bad form returned late. Spurs players moved fluidly without the ball and routinely got easy looks by way of back door cuts to the basket that they caught the Kings sleeping on.

In response to calls they found questionable, the Kings’ emotions ran high during the game – in the third quarter, Malone drew a technical foul that he was practically asking for – but afterward, they had nothing but respect and praise for their opponent.

“They executed better. They’re great at what they do,” Cousins said of the Spurs. “Being a young team, you can learn a lot from those guys – the way trust one another, how they communicate with one another. There’s definitely some things, us being a young team, to take back and add to our own game.”

Cousins was level-headed, but candid, following the loss, criticizing Sacramento’s ball movement on offense. In contrast to the selfless style of the Spurs, the Kings often relied on a one-on-one offensive approach.

Their offense was most effective when they made an effort to be more dynamic, with the ball and without. Travis Outlaw, who played 29 minutes with Gay battling a stomach ailment, was active off the ball and was rewarded for it.

Although he only averages 14.5 minutes per game, Outlaw looked plenty comfortable with his increased playing time Friday. He wasn’t shy about shooting the ball, but did so effectively, scoring 13 points on nine shots and helping to keep the score close before the Spurs’ fourth quarter onslaught.

Malone said he was content with his team’s performance, despite the loss, but was perhaps even happier that he won’t be gameplanning for San Antonio for a while.

Following their loss to the Spurs Friday, the Kings spoke of their opponent with something in between respect and reverence.

Sacramento was able to keep up with San Antonio for a half or so, but the Spurs never wavered in their execution, which the Kings couldn’t say about themselves. The play of Spurs starters and reserves alike left Malone so impressed he made his Finals prediction then and there.