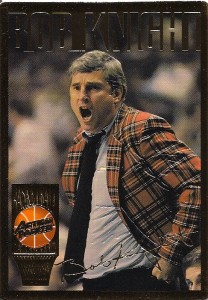 Bobby Knight’s mouth is getting him in trouble again.

During a Tuesday morning appearance on ESPN’s “Mike and Mike” radio show, the former Indiana coach and current ESPN analyst said it was as though the NBA has “raped” college basketball.

The response came after the 73-year-old Knight was asked whether freshman stars like Andrew Wiggins of Kansas or Jabari Parker of Duke would be ready for the NBA if they chose to enter the draft after just one season of college ball.

“If I were involved with the NBA I wouldn’t want a 19-year-old or a 20-year-old kid, to bring into all the travel and all the problems that exist in the NBA. I would want a much more mature kid. I would want a kid that maybe I’ve been watching on another team and now he’s 21, 22 years old instead of 18 or 19, and I might trade for that kid. On top of it all, the NBA does a tremendous, gigantic disservice to college basketball. It’s as though they’ve raped college basketball in my opinion.

Knight was not asked a followup question, nor did the hosts address any part of the comment. Yahoo Sports

The stupidest part about the discussion of creating an age-limit for college basketball players is the complete lack of accountability on both sides. The NBA is responsible for the rules that limit when players can enter the draft, and these rules have changed over the decades without conviction. The NCAA makes hundreds of millions annually from college basketball, but claims that paying players would hurt the game (of course they won’t call it a product), and, most importantly, the student-athletes.

In particular, why would any college coach say anything about the NBA exploiting the student-athletes when they are making millions of dollars as an annual salary? MILLIONS. Student-athletes who take a $20 meal for free will have their scholarship revoked.

I can’t say much more in a dignified manner in short order, but maybe Frankie Lloyd, the brilliant editor-in-chief of Baller Mind Frame, will let me write a column about this in the near future. – AL