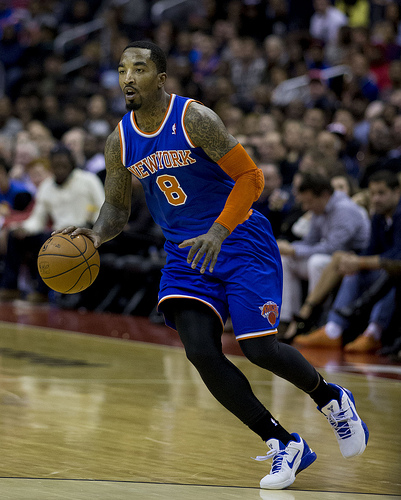 After falling behind by as many as 24 points, the Kings mounted a second-half comeback, but whenever they built a run or momentum, Smith quelled it with a three—nine threes to be exact. He tied a franchise record in the Knicks’ 107-99 win over the Kings.

New York capitalized from the perimeter all night long. Sacramento had routine lapses on defense, allowing their opponent to make skip passes along the three-point line in search of an open man. The Knicks shot 15-of-26 from three as a team and 57.7 percent from the field overall.

The Kings, particularly Derrick Williams, made some key defensive plays down the stretch, but timely shooting from Carmelo Anthony and Smith proved too much. Anthony’s shooting may be more accurately described as relentless, as the few times he wasn’t scoring were when he was on the bench with foul trouble. He finished with 36 points on the night, while Smith racked up 29 of his own.

“I told our guys at halftime that we didn’t make them feel us at all in that first half. They got whatever they wanted and they got it very easily; no resistance, no fight,” Michael Malone said. “You let two guys—J.R. Smith goes 9-for-12 (from three), Carmelo goes 5-for-8—I mean, that’s going to be tough to beat.”

While disappointed with the first two quarters, Malone attributed the Kings’ comeback effort in the second half to the players’ increased aggression. DeMarcus Cousins was perhaps the only Sacramento player whose attack never wavered.

Cousins did everything he could Wednesday, nearly recording a triple-double with 32 points, 15 rebounds, and 8 assists. Following a hot offensive start in the post early on, New York continually set loose double-teams on Cousins. Rather than confronting them head-on, the Kings center turned the Knicks’ aggression against them, darting cross-court passes to open teammates, who rewarded his generosity by knocking down shots.

The game marked Cousins’ 11th 30-point performance and 45th double-double of the season, but Cousins insisted afterward that statistics don’t matter to him nearly as much as winning. He said his goal for before the season was to make the playoffs, and while he failed this season, he’s committed to doing what it takes to win games.

Cousins has had little trouble finding his game this season, but the same can’t be said of his rookie teammates. Both Ray McCallum and Ben McLemore have struggled to perform consistently this year.

With Isaiah Thomas out Wednesday due to a right quad contusion, the rookie backcourt duo had an opportunity to step up and provide the Kings some much needed offense. McCallum started in Thomas’ stead, but was erratic in the first half. He missed multiple easy attempts at the rim, which led to baskets at the other end for New York. McLemore, meanwhile, started out hitting shots, but faded into the background through the middle of the game.

Both, though, finished the game strongly, largely influencing the Kings’ late-game rally. Especially in the fourth quarter, McLemore exuded greater confidence than he has most of, if not all of, this season. Amidst a Kings run, after making a three to cut the lead to 11, McLemore mimed holstering a six-shooter. From then on, there was no hesitation on his part to pull the trigger.

McCallum said he was instructed at halftime by Malone to assert himself more, which he did in the second half. Both rookies made key shots down the stretch to threaten for a victory. Despite coming up short, McCallum saw it as a learning experience.

“That’s a position I’ve never been in, getting the opportunity to start,” McCallum said. “I think after I settled down and let the game slow down, I was able to see the floor a lot better and really play my game in the second half.”

Cousins said he too encouraged his young teammates not to shy away from shooting when given the opportunity.

“I told him, ‘If you feel a shot, shoot it,’ and he started doing it and he made some big plays for us,” said Cousins, who also had words of encouragement for McCallum. “(I said,) ‘Just keep playing, we got your back. We in this together. You’re not out there by yourself.’”

Going forward, the Kings will have to follow Cousins’ lead—attacking early and often—because, as they learned Wednesday against the Knicks, their opponent may shoot first and ask questions later.