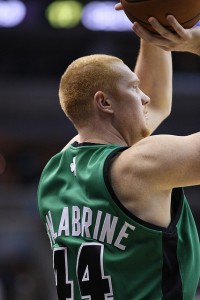 While this isn’t the first story of drama within the Warriors coaching ranks, it does happen to be the most interesting drama to surface. After all, Scalabrine was personally chosen by Jackson to join the coaching staff. In addition, Scalabrine has been praised highly in the past by Bulls head coach Tom Thibodeau, so it becomes even more unlikely that the reassignment comes as the result of poor performance. Which leaves me with my theory:

Remember the three-point contest that Jackson and Warriors guard Steph Curry held a few weeks back? I believe that The White Mamba was lurking in the background of the contest, and after Jackson’s eventual victory, challenged the head coach to a shooting contest of their own.

While what may have happened next is hard to guess, I believe that Scalabrine’s reassignment hints towards one of these two scenarios:

1. Jackson took Scalabrine up on the offer, underestimating him. Scalabrine showed up to the contest and ripped off his warmup pants, ready to show off not only his shooting touch, but also his pale thighs. Mark Jackson, who was unprepared for such a serious shootout, eventually lost and tried to blame it on the glare off Scalabrine’s thighs. Following the defeat, Mark Jackson could no longer stand to see Scalabrine’s smirk in the hallways, and forced his reassignment to somewhere they would not have to run into each other or have another shootout.

2. Jackson, aware of Scalabrine’s shooting prowess, did not want to lose his dignity, or the respect of his team, and declined the offer for a shootout. This led to daily tauntings by Scalabrine, where Jackson constantly heard the following:

“You think my hair is red hot, you should see my jumper!”

“What are you coach, chicken? Mmmm, don’t you know snakes love chicken? And the White Mamba is hungry.”

And “I know why you’re scared coach Jackson. Unlike your team when you are no longer the coach, your shot is definitely gonna miss the Mark!”

(We should have known that Scalabrine would be this witty).

Regardless of whether it was Scenario 1 or 2 that led to Scalabrine’s reassignment, it is a shame that such a move occurred. It is evident that Scalabrine is a well-liked guy, an individual with considerate basketball knowledge, and always a friendly face to see on the bench.

While Jackson’s reassignment of Scalabrine has delayed any chance of both a shootout and Scalabrine taking over as head coach, it is uncertain how much this will set back the White Mamba’s plans of world (or Warriors) domination.

If the next headline we see reads “Entire Warriors team spotted at Scalabrine’s Scala-Weenie Hot Dog Roast,” I think the world may have their answer.

Editor’s Note: If you haven’t seen “The Scallenge”, do yourself a favor and click here.