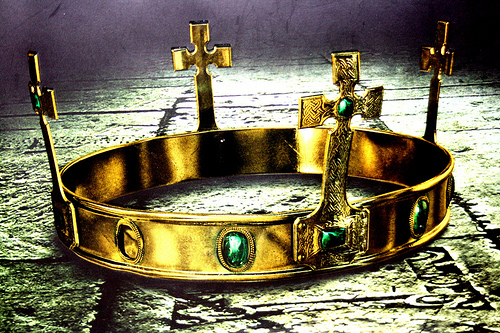 As far as bold proclamations go, “LeBron James: greatest basketball player on earth” has jumped the shark. James’ seized that mantle with his 45-point, cyborgian performance against the Boston Celtics in Game 6 of the 2012 Eastern Conference Finals and hasn’t looked back since. On the contrary, he’s held a white-knuckle grip on the title, running roughshod over the league in an ungodly rampage.

With each passing summer LeBron has added to his game, whether it meant marshaling his prodigious athletic gifts to become a destructive defender, developing a bruising post game, or refining his jump shot into a lethal weapon*.

His tour de force is now bordering on three full years, and—lest we forget—James was already a two-time league MVP before he ascended to this higher plane. His latest efforts have procured him two additional league MVP trophies and an NBA finals MVP award to boot, addendums to an already prodigious collection. It’s no longer a debate: he’s clearly the best.

That being said, being the best player does not necessarily equate to being the “most valuable.” The criteria for that distinction are nebulous and subject to personal discretion. Core indicators of value—basic statistics, win-loss record, the eye test—can be compared more or less under a consensus framework, but when we dig deeper into advanced metrics and basketball “philosophy,” it becomes apparent that what appears vital to some seems superficial to others. Determining the MVP thus amounts to a task of persuasion just as much as analysis, and to build a compelling case one must marshal evidence from both sides.

Moreover, the MVP discussion is perennially laced with considerations of how an award decision will impact the NBA canon. “Voter fatigue” is a term for this, but it fails to capture the vital role player narratives (their “legacies”) play in shaping the dialogue.

For example, in the 2010-2011 season, Derrick Rose narrowly edged LeBron James for MVP. James was a former winner and an established superstar, while Derrick was an ascendant talent who appeared ready to take the league by storm. Leaving aside the tragic injury saga that has since unfolded, Rose was the more compelling narrative at the time, and thus the more appealing choice. Naming him the MVP was a coronation: it elevated him to the ranks of the elite and ostensibly gave NBA fans another figurehead to follow.

Was Rose a better player than James at the time? Absolutely not, and the gulf has only widened with time. But had LeBron taken MVP that season it would have been his third straight award, a feat so far reserved for only Wilt Chamberlain, Larry Bird and Bill Russell. There was an inkling in the media of LeBron having not yet “earned it,” and that elevating him into air rarefied enough to exclude Michael Freakin’ Jordan was somehow morally reprehensible.

It comes as no surprise, then, that Rose ultimately won the award, even though during the 2010-2011 campaign, LeBron outscored Derrick (26.7 points per game versus 25.0), dished assists at a comparable rate (7.0 per game to Rose’s 7.7), and outrebounded him drastically (7.5 boards per game against 3.1 for Rose) while shooting a superior percentage from the field (51% versus 44.5%)**. Rose guided the Chicago Bulls to a superior overall record, finishing 61-21 to the Miami Heat’s 58-24, but in all other facets he was outclassed. What better proof to demonstrate that statistics alone do not an MVP make? Rose was humble, young and on the rise; James had just jetted to South Beach in ignominious fashion. Despite being the best, LeBron never stood a chance.

This takes us again to present day, where James is once more vying for his third-straight MVP. This time he is competing for the honor with the rangy scorer, Kevin Durant, who, while a better player today than Rose was in 2010, still fills the role in this equation of the punchy, ascendant underdog. At just 25 years of age, K.D. has never won a ring and only been MVP in the tritest sense—at the NBA all-star game. Still, like Rose, his fresh face could prove a significant advantage. Let’s compare their cases:

Looking at the metrics, we see Player A leads in minutes, points, three points percentage, rebounds, blocks, and win-loss record—six of the nine categories listed. This already amounts to a significant statistical advantage. The disparity is further exacerbated, however, by the fact that in some of the areas where Player B does have the advantage, the benefits are offset by deficiencies elsewhere.

For example, Player B’s impressive shooting percentage outpaces Player A by a significant margin, but this advantage loses value once we factor in Player A’s plus-5.4 point per game scoring margin. The sheer volume of points Player A produces makes up for his inferior field goal percentage—particularly since he still shoots with elite efficiency at 50.8%, and hits his three pointers (a value-added shot) at a higher clip than Player B.

Taken all together, these numbers suggest that Player A spends more time on the floor doing more things to help his team win, and that as a result, his franchise is outperforming Player B’s.

Player A is Kevin Durant. Player B is LeBron James.

So it appears that, in addition to the feel-good narrative, Durant does in fact have a statistical case to back his MVP candidacy. Before we crown KD the winner, though, let us examine some advanced statistics to see which player contributes the most value on a “quantum” level:

Player B has an even greater advantage in this data set than Player A did in our first comparison, winning four of five categories. The only victory to which Player A can lay claim is a marginal lead in shooting efficiency—but considering that he turns the ball over more frequently (14.4 Turnover Percentage) while handling the ball on a smaller percentage of his team’s possessions (30.4 Usage Percentage), that benefit is more than counterbalanced.

Player A is LeBron James. Player B is Kevin Durant.

It appears that no matter how you cut the statistical cake, Durant comes up smelling like roses. While LeBron is no slouch, his contributions are down from the last two years. This is presumably a product of fatigue, considering James’ has played into June for three consecutive seasons and only missed a smattering of those 120-odd contest each year. Regardless, in a moment of rich irony, it appears the very portion of the vote that cost James the MVP trophy in 2010—the basketball “philosophy,” the intangible criteria—is Lebron’s last remaining hope for a win this year.

It remains to be seen whether the media will reward James for his recent body of work and improved public relations, but if they do, he will finally be able to rest easy over Derrick Rose’s victory. Such subjective decisions are difficult to predict. For the moment, we must rely on the data in front us, and, unfortunately for LeBron, the name on those tea leaves…

*(the man’s a damn-near 40% shooter from three, the kind of accuracy that keeps one-tool specialists in the league)

**all statistics per Basketball-Reference