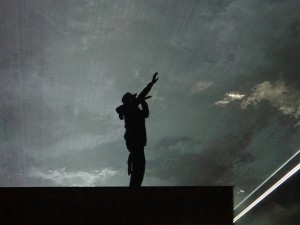 Considering Jay and ‘Ye once played “Ni**as In Paris” a dozen times at a single show during the Watch the Throne tour, we thought they might be a little hurt if we didn’t include it on the list. Aside from the catchy as hell “ball so hard” refrain, which you’ve undoubtedly whispered to yourself after hitting a jumper, this triple-platinum hit also features the memorable Jay Z line:

As we all know, Jay is referring to Game 6 of the 1998 Utah Jazz-Chicago Bulls NBA Finals, in which Jordan drained the iconic (burned into your brain by Gatorade commercials) game-winning shot over Bryon Russell to his secure his sixth and final ring.* What you may not know, however, is that this line is actually a nod to Biggie, who recorded a similar line on P-Diddy’s 1998 single “Victory”:

This is one of many instances in which Jay has appropriated his big brother’s lyrics and, unsurprisingly, his practice has divided some hip-hop fans. But whether you side with the “Jay Z’s a biter” crowd or “Jay Z’s a writer” crowd, the one thing that’s clear is that the guy definitely knows his basketball history.

*My theory, although not proven, holds that this line may actually be a prediction for the 2013-14 NBA Finals, in which the New York Knicks (Tyson Chandler) will defeat the Golden State Warriors (Mark Jackson, Jordan Crawford) in six games.

A man can dream….