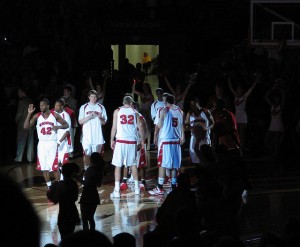 Bo Ryan’s team ground Baylor into submission getting the 69 -52 victory, guaranteeing their coach only his second trip to the Elite Eight during a run of 13 consecutive years in the tournament.

Wisconsin center Frank Kaminsky was dominant inside on both ends and his superior passing from the interior crippled the Baylor zone. A sequence at the at the 10-minute mark in the first half served as a telling microcosm for the one-sided basketball clinic put on by the boys from Madison. Kaminsky swatted guard Gary Franklin at the basket and the Badgers beat the the Bears down the court before they could set their zone. Four quick passes, two inside of the zone to Kaminsky, and a Sam Dekker three-ball followed. The Bears always seemed to be a step too slow.

The precision of the Badgers offense caused Baylor problems the entire night and Kaminsky finished the contest with 19 points, 4 boards, 3 dimes, and a beastly 6 blocks. The blocks were just a part of a Wisconsin defense that only allowed 16 points in the first half, Baylor’s lowest total of the season.

The Bears needed to scramble to muster their 52 points but the 17-point loss still managed to be the largest in Baylor’s NCAA tournament history. Wisconsin has had a relatively smooth ride to the Elite Eight but should be ready for a defensive battle against Arizona this weekend.