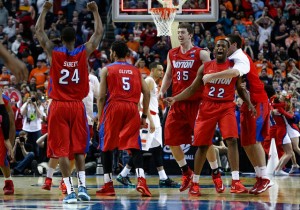 Playing in their first Sweet 16 since 1986, the Dayton Flyers did something they hadn’t done since 1984: make the Elite Eight. On Thursday night the Flyers, the 11th seed in the South region, took on the 10th-seeded Stanford Cardinal for a chance to play on Saturday night against either the No. 1 overall seed, the Florida Gators, or four-seeded UCLA Bruins. Nearly from the start, Dayton controlled the game, leading for almost the whole game en route to an 82-72 victory.

Dayton, who beat in-state rival Ohio State in their opening game, then the Syracuse Orange in their second, looked to be playing in another dimension against the Cardinal. Strong play from guard Jordan Sibert, coupled with their great depth and smart decision making, handled the Cardinal cover-zone defense all night. The Flyers shared the ball exceptionally well, dishing out 19 assists on 28 made field goals, including dishing out 13 on 15 first-half buckets.

The Flyers ability to knock down three-pointers, going 8-of-23 on the night, helped them pick apart the Cardinal even more with their strong dribble penetration. While Stanford fought and clawed, cutting the lead to as few as six on multiple occasions, Dayton was able to answer, pushing the lead right back up to double digits nearly every time. They controlled the game on both ends, and earned their ticket to the Elite Eight.

On the other hand, the Cardinal struggled for much of the game. In the first half, they shot an abysmal 2-of-9 from outside the painted area, and were unable force the Flyers into mistakes, yielding a mere two first-half turnovers. While guard Chasson Randle finished with a game-high 21 points, he was highly inefficient, going 5-of-21 from the field and 3-of-11 from deep.

Stanford’s guards’ inability to get solid penetration, coupled with strong defense from the Flyers, proved to be too much in the end. The Cardinal’s lack of depth (only two points scored off their bench) and ball movement (10 assists on 22 made field goals) dug them an even deeper hole. They had a good run beating a couple of strong teams in New Mexico and Kansas, but the Flyers proved to be just too much on Thursday night. 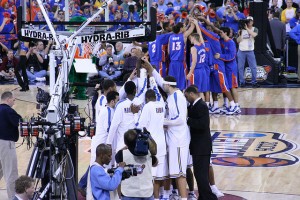 Looking for their fourth straight trip to the Elite Eight and 29th consecutive victory overall, the No. 1 overall Florida Gators took to the court against the UCLA Bruins in the nightcap in Memphis. When the final buzzer sounded, the Gators found themselves on top of the scoreboard, taking home the 79-68 victory. The senior-heavy Gators will take on the Flyers on Saturday for a chance to go to the Final Four next weekend.

After trading blows early on, Florida found its groove, thanks in large part to three first-half three-pointers from sharpshooter Michael Frazier. While Frazier was knocking down shots, leader Scottie Wilbekin struggled to find his rhythm, going just 1-of-7 from the field. The moment that changed the first half for the Gators was when Bruin Kyle Anderson picked up his second foul, which led to a 14-5 run for Florida.

After leading by six at halftime, the Gators came out looking to put the Bruins away for good. However, UCLA had other thoughts, fighting and clawing to keep themselves in the game. A 16-6 run saw them cut the Gators lead to one, but Florida answered, pushing the lead back out to double digits, thanks to big buckets from the gritty Wilbekin.

With foul trouble plaguing their big men, freshman Chris “Sky” Walker came in and gave them some solid minutes, grabbing three offensive rebounds, scoring five points and swatting a weak attempt from UCLA. He was highly recruited out of high school, but was ineligible during the first part of the season, not being cleared to play until February. While he hasn’t played a lot, he could play a key role for the Gators going forward as their fourth big man.

As the game wound down, the Gators’ tenacity proved to be just too much. UCLA’s jumpers stopped falling and the Gators used their killer instincts to finish them off as quickly and painlessly as possible.

Like their counterparts in the first game, Dayton, Florida moved the ball exceptionally well all night. When the game was over, Florida had assisted on 22 of their 29 field goals, including 11 of 13 in the first half. While they turned the ball over more than their opponents, their ability to win 50-50 balls and hit the offensive boards proved to be enough on the night.

They continue to grind out wins. Some may be pretty, some may not be, but they continue to find ways to win. They’ve got an interesting task coming up in the Flyers, but will undoubtedly be ready thanks to coach Billy Donovan and their senior heavy bunch.