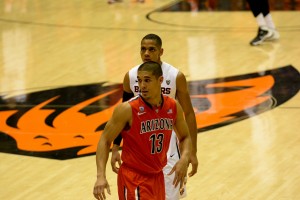 Nick Johnson, Aaron Gordon and the Arizona Wildcats pulled out a close one against San Diego State Aztecs, barely squeezing out a six-point victory, 70-64.

SDSU was led by Xavier Thames, who put up 25 points in a losing effort.

This game was a tale of two halves. To their credit, SDSU remained remarkably consistent, putting up 32 points in each half. In the first 20 minute block, the scrappy Aztecs made a six-point lead insurmountable. Braided Aztec forward Jordan Davis was a beast in the first half with six points and 11 boards, four of which were on the offensive side. Super freshman Aaron Gordon managed to keep the Wildcats in the game while Nick Johnson, Pac-12 Player of the Year, struggled the entire first half going 0-for-7.

The SDSU defense couldn’t hold down the Wildcats for the entire game, however, and their slim lead slowly eroded until Arizona took 50-49 lead on a T.J. McConnell layup at the seven-minute mark. Arizona’s push also coincided with a field-goal drought that slowed the Aztecs.

Despite Rondae Hollis-Jefferson fouling out, the offensive rebounds that fueled the Aztecs in the first half started to bounce the Wildcats’ way in the second, leading to second and third chances that the exhausted Aztec defense just couldn’t stymy.

Johnson eventually came alive, making his first field goal after a McConnell steal and draining a huge three at the 1:50 mark that proved to be the dagger. The Aztecs had a brief moment of false hope when they were awarded a 10-second violation but it was quickly rescinded as the referees has not reset the 10-second count after an Arizona timeout. Johnson was sent to the line with 26 seconds left and upped the lead to 67-61.

The Aztecs played the free-throw game as best as they could, getting one miss out of guard Gabe York, but couldn’t get quite close enough. The Wildcats were able to get the ball to Johnson who calmly knocked down 10-of-10 foul shots, making up for his disastrous first half.