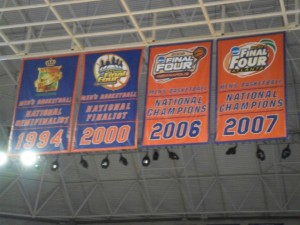 In the first of four Elite Eight matchups, the No. 1 overall seed Florida Gators took on the lowest remaining seed, the No. 11 Dayton Flyers, on Saturday night. While the Cinderella story Flyers put up a good fight, the senior-led Gators proved to be too much. Behind strong play of Scottie Wilbekin, Florida will advanced to its first Final Four since 2007 with their 62-52 victory in Memphis.

Despite a quick start from the Gators, Dayton didn’t get down, and kept the game as close as possible for much of the opening half. However, a 19-3 Gators run put the Flyers behind the eight ball. When the buzzer sounded for halftime, Florida found themselves with a nice 38-24 lead after Wilbekin knocked down a rainbow buzzer-beating three-pointer.

Florida’s size advantage proved to be the big key in the opening half. With versatile backup Dorian Finney-Smith playing the small forward, and Patric Young and Will Yeguete manning the power forward and center positions. Their added size and rebounding ability allowed them to go 9-of-16 in the painted area during the first half.

Out of the halftime break, Dayton looked poised to fight their way back into it after knocking down back-to-back threes. However, Florida had other ideas, never letting their lead fall below eight, holding it steady in the 10- to 16-point range for much of the half. While they were able to slow down Florida offensively, the Gators defense and rebounding proved to be too much.

When the final buzzer rang, one team celebrated while the other’s hopes for a continued run at glory came up short. Florida, who were playing in their fourth consecutive Elite Eight, finally came out the winners, while the Cinderella story Flyers were on their way back to Dayton. Even though the loss is disappointing and undoubtedly a gut punch to the A-10’s last hope, the Flyers can keep their heads held high as many didn’t even expect them to get out of the opening round.

Both teams looked crisp offensively, moving the ball exceptionally well for much of the game. While the assist numbers may not show that (Florida tallied 10 while Dayton had 11), each team’s ability to move the ball and find the best possible shot made for entertaining basketball all night. While the Flyers out-shot the Gators from both the field (19 FGM to 18) and from three(8 3PM to 5), Florida held a 15-point advantage from the free-throw line, and a plus-11 rebounding edge, including 12 to 5 on the offensive boards.

Wilbekin, the SEC player of the year, led all scorers with 23, but his biggest impact might’ve been felt on the defensive end. Guarding Flyers leading scorer Jordan Sibert for much of the night, Wilbekin held the Ohio State transfer to zero points on only three field-goal attempts. Bullying big man Patric Young and sharpshooter Michael Frazier joined their starting point guard in double figures, notching 12 and 10 points, respectively. Dayton was led by forward Dyshawn Pierce and Devin Oliver, who finished with 18 and 12 points on the night.

Florida, arguably the best defensive team in the country, will move on to Dallas next weekend for a trip to play for the national championship. The No. 1 overall seed will find out who they play tomorrow afternoon when Michigan State and Connecticut do battle in the East regional final.