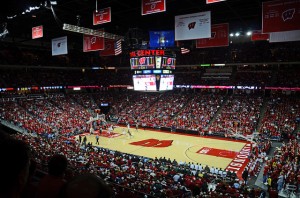 After enduring 13 consecutive years of March Madness disappointment, Wisconsin coach Bo Ryan’s consistency is rewarded. His Badgers are headed to the Final Four.

The Wisconsin Badgers squeezed out a 64–63 win over the top-ranked Arizona Wildcats, led by big man Frank Kaminsky.

In a game where points were hard to come by, the Badgers took after their coach and remained steady. Whenever a bucket was needed, the guards found Kaminsky, the only consistent option for either team. He finished with 28 points and 11 rebounds while shooting 11-of-20 from the field.

Arizona’s star forward, Aaron Gordon, was a beast on the boards with 18 rebounds but didn’t score his first field goal until the 2:30 mark in the second half. The Wildcats backcourt didn’t fare much better. Gabe York, T.J. McConnell and star guard Nick Johnson shot a collective 8-of-28 from the field, which was incredibly detrimental with Gordon’s lack of offensive production. Center Kaleb Tarczewski picked up some of the slack the with eight points in the first half, but only managed to score four more points the rest of the contest.

Despite trailing the entire first half and taking a 25-28 deficit into halftime, the slow pace seemed to favor Wisconsin, who had Kaminsky’s superior offense to lean on.

Arizona struggled mightily in the first 10 minutes of the second period. Kaminsky knocked down a three-pointer after a Wildcats offensive foul, immediately resulting in a Sean Miller timeout. On the following Wisconsin possession, guard Bronson Koening gave the Badgers their first lead of  game with 15:04 left, capping a 10-2 Wisconsin run.

Arizona responded by pushing the pace, resulting in a quick 8-0 run of their own with 11:52 left, but they couldn’t maintain the tempo and teams traded buckets for the majority of the second half.

Wisconsin had a chance to win it in regulation, but a Traevon Jackson-Kaminsky pick-and-roll was stopped by Gordon, who played the speedy Wisconsin guard well on the perimeter, forcing a contested shot and overtime.

Gordon came alive in OT, knocking down a three and getting a big slam after an offensive rebound, but Arizona still trailed 64-63 with under 15 seconds to go. Fresh off a McConnell missed pull-up jumper, the Wildcats swung the ball to Johnson who was controversially called for an offensive foul for pushing off Josh Gasser on his drive to the basket. It appeared Gasser made the first contact.

Arizona refused to quit. Rondae Hollis-Jefferson pressured the ensuing Wisconsin inbound, forcing it out of bounds. After an extremely lengthy review, the officials decided the ball last touched Jackson, giving the Wildcats one last shot with 2.3 on the clock.

Johnson dribbled hard to the left elbow but couldn’t get a shot up before time expired. Wisconsin will now face either (2) Michigan or (8) Kentucky in the Final Four.