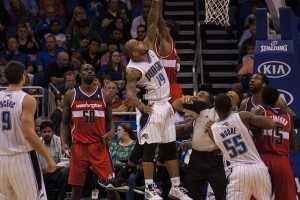 Playing in their penultimate home game of the season, the Orlando Magic hosted the division rival Washington Wizards on Friday night. Despite a quick start, the Magic came up short, falling to the Wizards 96-86. The loss, coupled with a win by the Boston Celtics, moved the Magic back into the third-worst record in the league, while it allowed Washington to move back up into the sixth seed in the Eastern Conference playoff picture.

To start the game, Orlando looked like the much better team, controlling the game on the offensive end. The Magic’s activity on the boards, coupled with poor shooting from the Wizards, allowed them to push the lead to as many as 13 before the buzzer sounded to end the quarter. Orlando’s balanced scoring attack saw them lead their division rivals by 12, 29-17 after one.

In the second period, Washington began to hit on all cylinders, whittling the Magic’s lead down slowly. Thanks to a 17-5 run, Washington tied the game up not even six minutes into the quarter. However, Orlando answered, going on their own 17-11 run to end the quarter to lead the Wizards 51-45 at the half.

Out of the halftime break, the Magic began to struggle, turning the ball over and failing to get baskets at a consistent rate. Their struggles, coupled with the Wizards getting into more of a groove, allowed Washington to inch closer, taking the lead at times as the two divisional foes went back and forth for stretches in the quarter. At the end of the third, Orlando found themselves up three heading into the final 12 minutes of action, looking to win three consecutive games since early February.

The fourth quarter, however, was a struggle for the Magic. They were forcing shots, and found themselves turning the ball over more and more. To their credit, the Wizards picked up the defensive intensity, causing the already stagnant Magic problems.

In the end, the playoff-bound Wizards proved to just be too much, taking home the hard fought victory in Orlando.

After the game, one of the big topics of discussion was the Magic’s turnover issues in the second half. Head coach Jacque Vaughn had this to say about them: “I think their physicality ended up catch up to us overall. I’m not sure how many personal fouls we had, looks like 31 personal fouls. I think that was a big part of it. We moved the ball extremely well in the first half. I think we had 16 assists, but overall their physicality started to catch up. Give them credit for that.”

Multiple Magic players chimed in on the problem as well.

Tobias Harris: “The first half we moved the ball a lot, making plays. In the second half, kind of got away from that. Defensively we weren’t getting any stops.”

Arron Afflalo: “Turnovers in the third quarter, lack of defensive rebounding a little bit. Kind of got them back into the game, got them into a good rhythm. We got to play without fouling.”

Another big topic was the fact that the team’s offense became so stagnant in the closing half. When asked, all the Magic players had the same thing to say: move the ball better. After posting 16 assists on 22 made field goals in the first half, the Magic struggled in the second, registering five assists on 10 made buckets.

Afflalo spoke about the stagnate offense after the game. “We got to move the ball, be decisive and be deliberate about the things you want to accomplish on the offensive end. Just can’t be helter skelter out there. That comes with maturity and growth and knowing when things get a little patchy or a little rough on the offensive end, knowing what you want to get to and what works well for us.”

The win, coupled with the Charlotte Bobcats loss, was a big one for the Wizards, yet they’re not getting too caught up in it. Head coach Randy Wittman was asked about the battle for the sixth seed. “Well, again let’s worry about Milwaukee tomorrow. It does us no good if we don’t take care of ourselves. That’s kind of what we’ve been talking about all along. It gives us an opportunity again to, if we take care of our business, that that’ll work out, but we’ve got to take care of our business.”

The Wizards got nice contributions across the board. Big man Nene, playing in his second game back after a knee injury, recorded 17 points off the bench. Sharpshooter Bradley Beal finished with 16, while starting big men Trevor Booker and Marcin Gortat finished with 14 and 12, respectively. Rounding out the Wizards in double figures was point guard John Wall, who finished with 10 points and 12 rebounds. Rookie Otto Porter set a career high as well, finishing with nine points and nine rebounds off the bench.

Orlando relied heavily on the play of their starting backcourt. Afflalo once again led the team, finishing with 19 points, while Jameer Nelson flirted with his first career triple-double, finishing with 12 points, 11 assists, and seven rebounds. Big man Kyle O’Quinn put in another working man’s night, finishing with 13 points and nine rebounds. Off the bench, sharpshooter Doron Lamb poured in 11, while versatile forward Tobias Harris finished with 10.

Next up, the Magic embark on their final two-game road trip of the season, a back-to-back in Brooklyn and Chicago on Sunday and Monday. Washington returns to action tomorrow night, as they look to keep their winning ways going against the lowly Milwaukee Bucks.