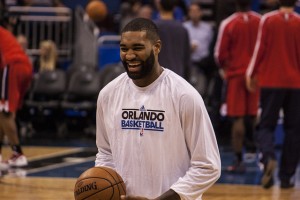 As his second season in the NBA winds down, Orlando Magic big man Kyle O’Quinn has shown that he belongs in the league for the foreseeable future with his strong play and improvement. O’Quinn, a second-round pick out of Norfolk State, was up and down in the beginning of the year, struggling to find playing time for much of the first two months. His big break came during a thrilling triple-overtime loss to the Chicago Bulls. In that contest, O’Quinn logged a then season-high 24 minutes, finishing with 12 points, 7 rebounds, and three blocks in the loss. Since then, O’Quinn has been a key member to the rotation that head coach Jacque Vaughn has rolled with. So, what has been the key for the Norfolk State grad’s increase in playing time?

Simply put, consistency and continued growth. After a recent win against the Brooklyn Nets, a game in which O’Quinn had a game-saving block, coach Vaughn gushed about his big man. “It really just shows how he’s getting better on a daily basis. He was locked into the possession, he knew what we were doing defensively, he gets a block without fouling and this was after we ran a play on the other end; Arron (Afflalo) throws him a pass, short corner shot misses. Playing forward, not letting that next possession affect him. That’s tremendous. That’s what we want to see.”

This isn’t the only time Vaughn or a teammate has raved about O’Quinn’s improvement and ability to make “the right play.” In the same game, O’Quinn made a key pass to a hard cutting Maurice Harkless, who finished with a big dunk that all but sealed the contest for the hosting Magic. It’s the small things that O’Quinn does, whether it be making the right pass, blocking a shot, or getting a timely rebound, that have shined as the season wears on.

After being inserted in the starting lineup some 16 games ago, O’Quinn has seen his numbers improve drastically. In 16 starts, the 6’10” big is averaging 9.3 points, 7.1 rebounds, and 2.2 blocks. He’s added something that the Magic have desperately missed the last two seasons: a true inside shot blocking presence. According to NBA.com’s SportsVU stats, O’Quinn ranks seventh among players who have more than 60 blocks on the season in opponent field goal percentage at the rim, allowing foes to shoot just 45.5 percent in those situations. That ranking puts him ahead of the likes of Joakim Noah, Dwight Howard, Tim Duncan, David West, and Anthony Davis, just to name a few.

Not only has O’Quinn improved and been a force on the defensive end, he’s shown off some stout passing skills on offense. While his assist numbers may not be high, averaging just 1.1 dimes per game, he’s shown he knows when to make the right pass at the right time. He’s able to play and pass well out of both the high and low posts, and has an uncanny ability to hit cutters perfectly with brilliantly timed bounce and chest passes.

O’Quinn’s versatility also gives coach Vaughn a nice piece moving forward. He’s been able to see how O’Quinn responds to playing the power forward spot along side center Nikola Vucevic, while also seeing how the second year man plays in a reserve role at center, amongst other things. O’Quinn has good chemistry with many of his teammates both on and off the court, which adds to his consistent play this season.

Seemingly always in good spirits, O’Quinn is not one to shy away from messing with teammates in the locker room as well. One of his most notable moments this season was his joking about how teammate Tobias Harris believes he’s one of the team’s best dressed, but is “always wearing NBA socks no matter the outfit.” Not only did his teammates get a good laugh out of it, but the media did too, enjoying the upbeat O’Quinn’s hot takes on teammates fashion styles, a role veteran point guard Jameer Nelson usually takes.

For a young and growing Magic team, O’Quinn’s play and improvement is important, but so is his positive attitude in the locker room. This Magic team is young and as is the case with many young, rebuilding teams, they suffer through tough stretches and lose a lot of games. Having a guy like O’Quinn who can keep the attitude up is an underlooked element that is missing from many rebuilding teams. He’s got all the things that any team would like to have, and it’s easy to see why general manager Rob Hennigan selected the fun loving big man in the 2012 draft.

While O’Quinn might not be the biggest name on the team, he’s shown this season that he’s taken one of the biggest steps of the stable of young guns on the Magic’s roster. He’s been a pleasant surprise, and will undoubtedly continue to grow both as a player, and a personality on the rebuilding Magic.