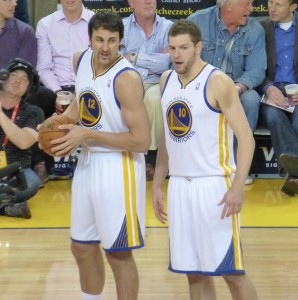 Andrew Bogut might have been cagily setting everybody up for a grand return at some point during the Warriors’ playoffs run after suffering a fractured rib last night… but I don’t think that’s how he’s playing this or ever will.

Bogut sat at his locker before the game, spoke gloomily about the possibility of further contact helping to puncture his lung, and said he can’t do much of anything at all right now, anyway.

The Warriors and Bogut say he’s out “indefinitely,” but every indication from Bogut is that he is out for the rest of this season, including the playoffs, barring some miracle recovery. San Jose Mercury News

Ouch. I suspected this would be the case based on the Warriors’ silence regarding Bogut’s injury following the conclusion of last night’s game. Bogut and David Lee have been consistent scratches from the Warriors’ starting lineup this year although they both earn around $14 million annually. That’s a huge chunk of salary cap for guys that you can’t rely on. Stephen Curry’s presence will still be an issue that teams will fear in the playoffs, but the concern of being upset is nil without an inside presence.

The Warriors will be fun to watch anyway, but do not to see them beyond the first round following this devastating news. – AL