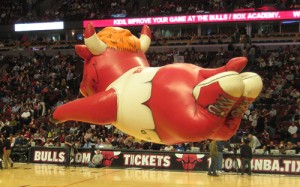 The Orlando Magic were in Chicago last night to play the Bulls in their final road game. With just one game remaining in the season after this, the Magic were playing the spoiler role with the Bulls in the thick of the Eastern Conference playoff seeding. They are currently tied with the Toronto Raptors for the third seed, an impressive feet when factoring in the injury of Derrick Rose and departure of Luol Deng, two of the Bulls’ staples for the past few years. Victor Oladipo got the starting nod for the second straight game as Jameer Nelson continues to nurse a sore groin. Both teams were on a second game of a back-to-back coming from New York with the Bulls losing to the Knicks, and the Magic losing to the Nets.

The Bulls came out blazing in this one and popped off a 14-2 run to begin the game. Kyle O’Quinn was the only Magic player to score in the first six minutes. The Bulls defense was stifling, and with Nelson and Nikola Vucevic continuing to sit out, it was very tough for Orlando to find any offense. The Magic battled back towards the end of the quarter after buckling down on defense, leading to some easy buckets on the other side of the floor. Jacque Vaughn and Co. trailed by just two points before the end of the period. Tobias Harris had a rough time, picking up three fouls in five minutes, and was never really able to get things going in this one.

Chicago again pulled away with another run in the second period and quickly gained an 11-point lead. Much of the Bulls’ early success can be attributed to the play of Carlos Boozer and Mike Dunleavy. The former Duke teammates combined for 19 points in the first half. It was evident that Chicago is still scrambling for playoff position; the same could not be said for the Magic, as it was really only Andrew Nicholson and Kyle O’Quinn that looked like they were playing with any sort of energy.

The Bulls, led by head coach Tom Thibodeau, are the second-best team in the league in terms of defensive efficiency, and it showed last night. Orlando struggled throughout the game to get good looks, and the team’s leading scorer, Arron Afflalo, was cold for the second straight game. Chicago was able to maintain its double-digit lead in the third period after Orlando briefly cut the lead to three points.

Although Boozer played a solid game, he ran into foul trouble in the third quarter, and was forced to sit on the bench for most of the final period with five fouls. Because the Bulls had a sizable lead, it was not much of a problem for Thibodeau, who saw others step up in his place. Guys like Jimmer Fredette and Taj Gibson came off the bench and excelled in replacing the scoring and rebounding that Boozer had been providing all game long. Of course Joakim Noah continued his tear through the league and was able to put up his typical big numbers: 18 points, 10 rebounds, and 8 assists.

The Bulls led the entire game and Orlando never had a chance. The game ended with a final score of 108-95 in the Bulls’ favor.

Mike Dunleavy had a big night for his team, providing a ton of offense, efficiently. He came out of the gates hot and remained consistent throughout the game. He finished the night with 22 points on 8-of-11 shooting to go along with five assists.

The Bulls got off to an early lead and never looked back. Orlando was never really in the game as the Chicago defense completely iced the Magic attack. Although both teams played the night before, the Magic looked like the tired team. Andrew Nicholson and Kyle O’Quinn were the only guys able to get anything going in this one.

Harris has played extremely well in his new role as the sixth man, but he was ice cold last night. He ran into foul trouble early on and never bounced back. He shot just 2-of-12 from the field and tallied a total of four points. With Nelson and Vucevic sitting out, Orlando really needs Harris to score to be successful, and that did not happen.

The Magic have now hit a three-point field goal in 572 consecutive games.