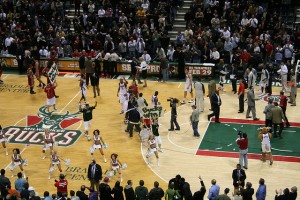 After nearly 30 years as team owner, Herb Kohl announced Wednesday that he’s entered into an agreement to sell the team to Marc Lasry and Wesley Edens, both accomplished hedge-fund billionaires.

The deal, pending league approval, was announced during a press conference at the BMO Harris Bradley center Wednesday afternoon.

Kohl will reportedly receive a whopping $550 million for the team – a hefty profit considering he paid just $18 million to acquire the franchise in 1985. By comparison, the Sacramento Kings were sold at a total valuation of over $534 million in May 2013.

Since announcing in December that he was looking to expand or transfer ownership, Kohl has remained committed to keeping the Bucks in his hometown. A large part of the reason Lasry and Edens were chosen among several prospective candidates is their shared goal of remaining in Milwaukee.

As part of his commitment, Kohl announced he would pledge $100 million toward the construction of a new arena. Last year, then-NBA deputy commissioner Adam Silver deemed the BMO Harris Bradley Center “unfit” for the league, and the Bucks were given a hard deadline of 2017 to have a new arena deal in place. Behind The Buck

It’s hard to see the number five hundred and fifty million and not recall how many teams claimed they were operating at a loss prior to the most recent lockout. According to Forbes, that figure is nearly half of what the Los Angeles Lakers are estimated to be worth. I don’t know what that means, but I’m happy for the city of Milwaukee.

All they need now is some ping pong luck and then they will be the envy of everyone in Wisconsin. – AL