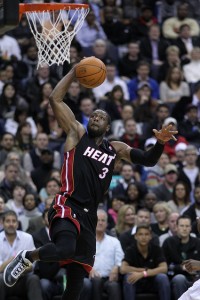 Over the past few seasons, there have been whispers throughout the NBA that Dwyane Wade’s game is dead. He’s no longer an explosive player, just an afterthought of LeBron James. As Oklahoma City Thunder forward Kevin Durant said in an interview before last season, “I stand by what I say. It’s nothing against D-Wade … but like I said … it’s time to pass the torch.”

It’s fitting that Dwyane Wade broke out on Easter Sunday to score 23 points and help the Miami Heat move one step closer to a third consecutive NBA championship. They defeated the Charlotte Bobcats 99-88 to take a 1-0 lead in its 2014 Eastern Conference first-round playoff series.

Miami Heat head coach Erik Spoelstra had decided to not play Wade every game this season, in an attempt to keep him fresh for the playoff push. Wade sat out 28 games this season in hopes of avoiding a lingering knee injury that has plagued him in previous years.

The decision to rest Wade during the season appears to have worked. Wade looked explosive and refreshed in 34 minutes of play, showing little signs of fatigue. In isolation, he aggressively attacked the basket, and had optimum lift on his step-back shots.

Wade appears to be physically ready for the playoff grind, so don’t put him in the tomb just yet. Just continue to have faith. In three days, D-Wade can rise again; Game 2 will be played on Wednesday night.