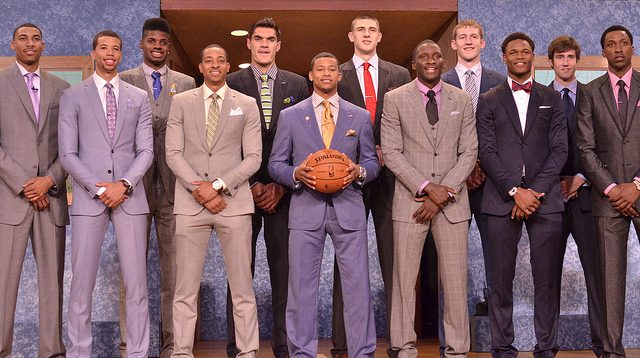 Following an excruciatingly long regular-season run, the Sacramento Kings have found themselves in an all too familiar situation. With a promisingly deep draft class filled with potential superstars, role players and busts, the selection process for the league’s bottom teams means hope. They may not lock up the next Kevin Durant, but hope for these franchises is nonetheless present. Hope for success, hope for development, and hope for the future. The 2014 draft class has delivered hope in situations where before there was none.

After a number of tie-breakers and final regular season games, each team’s chances of securing the number one pick have been released, and the Kings have been plagued with a very familiar position in the lottery.

They have a 4.3 percent chance of winning the draft lottery, giving them the seventh-best odds in the league.

While 4.3 percent seems like nothing compared to the Milwaukee Bucks’ 25 percent chances at the first pick (and with it, a handful of potential superstars in Joel Embiid, Andrew Wiggins and Jabari Parker), the Kings will be well served as long as they get to pick within the seventh spot or higher.

It’s a position which almost always encompasses a young player with great potential coming out of college. The seventh pick is high, but not so high that a player feels the weight of the world on his shoulders as he enters an entirely new realm of basketball. The story was different last year, as Ben McLemore fell all the way into the seventh slot when he should have been picked within the top-three.

Players like Stephen Curry, Luol Deng and Chris Mullen have been selected seventh. While a top-5 pick in the 2014 draft would mean a great deal for the Kings, it may be equally as beneficial to have a young player with great talent and realistic expectations coming out of college.

If the Kings do indeed become locked into the seventh pick, the available players will likely accommodate some of the team’s biggest needs. With Michael Malone looking more and more like a long-term head coach in Sacramento, the team may be entering the 2014 draft with a defensive playmaker in mind. It’s the same reason a player like Wiggins is projected so high; his defensive upside is something every bad NBA team longs for.

To cater to Malone’s defensive-minded approach, the Kings would be best served if they spent their seventh overall pick on Marcus Smart. It crowds the point guard position just a little, but Smart’s defense is an upgrade over Isaiah Thomas’, which can’t be overlooked. Thomas does almost everything possible with his sub-six-foot height, and defense has been a clear point of weakness in his game. With such athleticism on the floor at all times in McLemore, Derrick Williams and Rudy Gay, this team’s fastbreak potential is just waiting to be uncapped. Thomas is stellar in transition, but doesn’t possess the ability to cover multiple positions and make defensive plays which translate into offensive buckets. Smart, on the other hand, does.

Smart’s 6-foot-4, 225 pound stature and impeccablinstincts make him a menace on the defensive side of the floor, as he is able to bully smaller point guards into making poor decisions throughout games. He can also body up on taller assignments down low, providing a luxury to a Kings team which is constantly mismatched due to lost assignments and rotations. For example, a player like DeMarcus Cousins, who is forced to cover guards because of busted defensive stands, would benefit greatly from a player like Smart who could take these assignments for him.

His ability to get into passing lanes and take the ball away from any position, however, is what makes Smart the Kings’ best option if they wind up with the seventh pick. No matter how good he is offensively, Thomas’ lack of ability to guard multiple positions is not what the Kings need to become effective in transition and formidable on defense. A point guard with the length, size and strength to slip into passing lanes and get the fastbreak going, while also offering help in the paint against big men would be the best and safest pick at the seventh position. Smart fits the bill for Sacramento.

Also projected to be available at the seventh position is Doug McDermott. While he is an overbearingly one-dimensional player, McDermott’s size and shooting ability may fit well into the Kings. It’s obvious that the Kings have a huge gap at the power forward position, (Jason Thompson and Reggie Evans aren’t quite cutting it) and McDermott may fit in well with the Kings rotation by playing the small forward position and allowing Rudy Gay to play the stretch-four. He has the size and driving ability to play the four, and can back down almost any NBA defender.

With the league increasingly favoring small lineups, a pairing of McDermott and Gay could give the Kings a faster lineup with immense shooting potential in Thomas, McLemore, McDermott and Gay. Pair all this shooting with the low-post presence of Cousins, and the Kings could have a high-powered, modern NBA offense. The fallout could be on the defensive side of the floor, but that will ultimately be decided by how McLemore and McDermott grow as players. If they can improve their defensive game while being consistent shooters, McDermott could be a good fit for the Kings.

A more direct solution to the lack of a power forward presence would be Julius Randle, one of the best big men in the draft. However, if the Kings do indeed get the seventh pick, Randle will likely be gone. It won’t be until the draft lottery that we know for certain where the Kings will pick, but for now the seventh position gives them good odds to nab franchise-improving player, though not a franchise-transforming player.

Obviously, the higher the Kings select the better. In an exceptional draft class, any team will be well-served by the top-ten players who all boast huge upside. For many of the NBA’s franchises, including the Sacramento Kings, the 2014 Draft could be a key for future success.