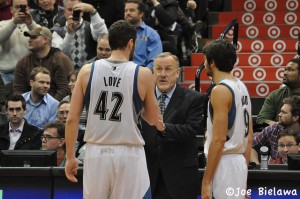 From cuts to the basket to shrugs of the shoulders, Rick Adelman said being observant of his players was the key asset he cultivated during 23 seasons as an NBA coach.

“I always read the players, read their body language and what was really going on, so you could address it,” he said. “… They may think it did, but not too much got past me.”

Adelman put coaching in his past Monday with the announcement that he is stepping down after three seasons as the Wolves’ coach to become a consultant with the franchise.

Adelman, 67, is one of eight coaches in NBA history to amass 1,000-plus wins. Some of the league’s best coaches — from San Antonio’s Gregg Popovich to the Los Angeles Clippers’ Doc Rivers — said they will remember his indelible offensive schemes.

“It’s nice to see some of the nice things people have said,” Adelman said. “Those are the things you remember.” Pioneer Press

Adelman’s tenure in Minnesota will be remembered as a series of underachievements, but that will not define Adelman’s entire coaching legacy. He’s well-known in coaching circles as an offensive guru, and was able to coach competent teams in three different decades. Adelman never had the luxury of a coaching a superstar which affected his playoff success, but he was still able to accumulate over 1,000 wins which puts him in an elite coaching circle.

The Timberwolves’ recent misfortune mostly belongs to uneven rosters acquisitions, and bad contracts. A head coach coaching switch alone will not change the direction of the franchise, especially considering Kevin Love’s upcoming unrestricted free agency. Wolves’ fans are hoping this is the first of many decisions that lead to better days. – AL