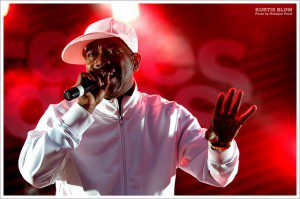 Basketball is my favorite sport
I like the way they dribble up and down the court
Just like I’m the king on the microphone so is Dr. J and Moses Malone
I like slam dunks take me to the hoop
My favorite play is the ally-oop
I like the pick-and-roll, I like the give-and-go,
‘Cause it’s basketball, with Mr. Kurtis Blow

True to the nature of real pick-up ball, he even used street ball trash talking during the bridge of the song. “D-up sucka’, you can’t check me, in yo’ face—swish.”

“Basketball” is a classic hip-hop song performed by one of rap’s pioneers, and currently is in rotation throughout NBA arenas. For all the homage being paid to the sport of basketball in the form of rap lyrics, “Basketball” by far is the ultimate. No other dedication to the game comes close.