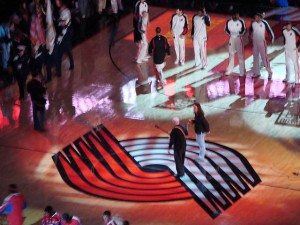 Another game down, and another soul-draining loss for the Houston Rockets.

Despite boasting a 10-point lead in the third quarter (a tradition for the Rockets in this series it seems), the Rockets were unable to even up the series, and at least part of the blame for the loss should be attributed to turnovers in key situations. It wasn’t just the amount of turnovers that proved costly (the team’s 16 giveaways is their highest total through the first four games of the series), but their timing as well.

During one third-quarter stretch, the Rockets held an 11-point lead and looked to have the crowd neutralized, but proceeded to turn the ball over on back-to-back-to-back possessions, a series of events that halted their momentum. Perhaps the most costly play of all came with 30 seconds left in the fourth quarter with the Rockets up by two. Following a defensive rebound, the Rockets opted not to call a timeout, and thus Jeremy Lin tries to push the ball up the court through the Trail Blazers pressure. Mo Williams was able to poke the ball away from Lin, and save it from going out of bounds. Following a missed hook shot by Wes Matthews, the Blazers were able to grab the offensive board, setting up a three-pointer by Mo Williams to give the Blazers the one-point lead. Thus, rather than a chance to either draw a foul or run down the clock and make it a two possession game, the Rockets found themselves trailing.

In no way is Lin to blame single-handedly for the loss however. The Blazers defensive effort harassed the Rockets all night, perfectly illustrated by Matthews steal on Patrick Beverley (another turnover!) with three seconds left that sealed the Blazers victory. Overall, the Blazers looked to be the more active team which was most likely a result of the raucous Portland crowd that was able to muster up a few impressive “These refs suck!” chants at different points of the night. While the refs may have been questionable (I could write perhaps a 10-page essay on the ineptitude of the officiating in this series, but i’ll wait), there was no question that the Blazers players were away of the excitement in the building.

LaMarcus Aldridge led all scorers with 29, while Batum (25), Lillard (23), and Matthews (21) all chipped in more than 20. James Harden led the Rockets with 28, but once again struggled to hit jumpers on his way to a 9/23 shooting night, and 3/11 from three-point range. The Rockets loss also overshadowed a strong shooting night for Chandler Parsons, who had 26, and an excellent showing by Dwight Howard in clutch time from the free-throw line. While Howard’s 25 & 14 came rather quietly, his two big blocks and 5/6 free throws in the fourth quarter/overtime really kept the rockets in the game.

Another bright spot for the Rockets came in the form of Troy Daniels, who followed up on his “OHMYGOD did he just hit that!?” game-winning three from game three, with 17 points on 4/5 threes this game. Even better, he score 6 of the Rockets’ last 8 points, including three free throws with 8.9 seconds left that pulled the Rockets to within one. Daniels’ performance is also noteworthy for another reason: the poor production by both Houston’s guards and their bench throughout this series.

With another poor shooting night from Jeremy Lin, Kevin McHale may increase Daniels’ minute load in game 5, as the Rockets attempt to find some semblance of bench productivity. Besides Daniels, Jeremy Lin (4 points, 5 rebounds, and 4 assists) and Terrence Jones (8 points, 6 rebounds) were the only players that McHale used off his bench–a decision that was somewhat surprising seeing as how the game went into overtime for the third time in four games.

Whatever decision McHale makes regarding his rotations, it has become obvious that Blazers head coach Terry Stotts has been more successful with his adjustments throughout the series. If the Rockets have any chance of coming back from the 3-1 series deficit, something needs to happen. The predictability of the offensive sets late in the game are crippling the Rockets’ ability to get open looks, instead settling for fall-away threes, an abundance of iso-Harden plays, and a double-teamed Dwight. While you have to credit him for recognizing Daniels’ effectiveness and finding him minutes, that may be his only noteworthy adjustment of the series to this point.

For another night, Portland set the crowd ablaze with clutch shooting and activity all over the court, and the Rockets were dealt another hard-luck loss. While the Rockets can find solace in the fact that they have: 1) had a late lead in every game, 2) held Aldridge to less than 30 points in back-to-back games, and  3) have yet to get Harden clicking throughout an entire game, they are running out of time to live up to the Clutch City moniker.

The Blazers effectively hit the Rockets in the jaw with their win in game four, now it is time to find out whether James Harden’s beard (and the rest of the team) can withstand the punch and come out swinging at home in game five.