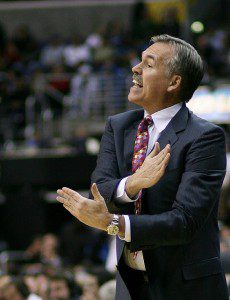 Mike D’Antoni resigned Wednesday as the Lakers’ coach, ending a tumultuous two-year run with the team and putting a finishing touch on one of their worst seasons ever.
D’Antoni had one more guaranteed year for $4 million but was dismayed when the Lakers declined to pick up his option for the 2015-16 season at another $4 million.

Veterans Kobe Bryant and Pau Gasol disliked his small-ball approach, leading to some disharmony in the locker room as the Lakers were 27-55 and set the franchise record for most losses.

The Lakers’ coaching search will be “completely wide open,” but they are not expected to have a new coach in place by the May 20 draft lottery, according to a person familiar with their thinking.

Even though the Lakers have dim prospects for next season, making their coaching job somewhat less attractive than usual, they might pursue a high-salaried, big-name NBA coach. Or they could go after a low-salaried NBA assistant with upside on a shorter contract. Los Angeles Times

Here’s a gif of Lakers’ fans around the world reacting to the somber news.

D’Antoni’s two-season tenure will be remembered as a complete failure although it would be unfair to not include footnotes about the front office theatrics and debilitating injuries to key players. By any measure, it was a bad fit in the first place, but who wouldn’t take the huge payday the Lakers gave him?

Who is the next guy to take on the great responsibility of leading the Lakers to a quick turnaround? The rumors are everywhere and this news is less than 12 hours old so there’s nothing solid to go on yet. The most surprising name on the list of replacements was Derek Fisher, a guy that Kobe Bryant loves and respected by everyone in the league. Bryant will be happy to have anyone else leading the team no matter what. – AL