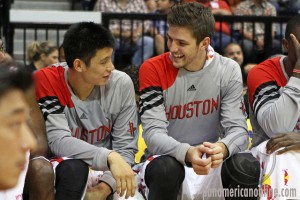 The Houston Rockets decided that they weren’t quite ready to head into the offseason.

Behind Jeremy Lin’s strongest game of the series, the Rockets protected their home court for the first time in the playoffs, and will be headed back to Portland on Friday to try and stay alive long enough to play one more home game.

Lin scored 21 points and provided the offensive spark and composure off the bench that the Rockets have been seeking all series. After struggling to get into rhythm in any of the first four games of the series, Lin came up big on a night when Patrick Beverley (flu-like symptoms) looked as though he’d be better suited in the hospital than on the bench. Credit needs to be given to Beverley for expending energy he didn’t even seem to have, but much of the praise for this win has to go to Lin rebounding from a big Game 4 turnover that had become the talk of all Rockets fans throughout the week.

The consensus had grown so harsh on Lin since the Rockets’ loss on Sunday that booing could be heard when Lin first checked in, and while this may have just been one game, he went quite a ways toward silencing the critics who had been so (L)infuriated with his play up until this point in the series.

Chandler Parsons (20) and Dwight Howard (22) joined Lin in scoring 20 or more, while Omer Asik had 10 points and 15 rebounds in 34 extremely productive minutes. Asik’s 15 rebounds were a game high, and despite getting blocked pretty badly a few times, he remained active in the paint—a huge key to the Rockets victory. In fact, the Rockets duo of Howard/Asik had 29 rebounds, a figure that nearly matched the 34 rebounds that the entire Blazers team was able to gather. Overall, the Rockets were +14 on the boards.

Perhaps the biggest key to the Rockets win, however, was the team’s ability to limit LaMarcus Aldridge’s involvement in the Blazers offense. Aldridge scored just eight points on 3-of-12 shooting, and was noticeably absent throughout most of the game, as Nicolas Batum (6-of-10 shooting) was the only starter to attempt fewer field goals. While Damian Lillard (9-of-18 for 26) and Wes Matthews (9-of-18 for 27) were lights-out all night, the inability of the Blazers bench to score was evident throughout the night. Overall, the bench shot just 2-of-11 for five points, and Dorell Wright’s plus/minus of -19 in 10 minutes of action paints a picture of when the Rockets were able to make their runs.

One question that was on Rockets fans’ minds all week was whether or not James Harden would show up and shoot well for the first time in the series. While he struggled early and was seemingly a non-factor throughout the game, he scored eight points in the last four minutes of the game, and … wait for it … had two of the biggest defensive plays of the game. The first play came on a Blazers fast break when Harden backpedaled his way into position directly in front of Matthews on a drive. There was noticeable contact, but because Harden had placed himself in perfect defensive position (perhaps for the first time all series), no foul was called, and Matthews was forced to take an out-of-control layup which he was unable to knock down.

The second big defensive play came when Harden closed out well and was able to block a Lillard three that ensured there would be no last-minute dramatics in Game 5. Harden’s overall stat line (5-of-15, 1-of-7 from three, for 17 points and 7 assists) may have been unimpressive, but he came up when the Rockets relied on him, and I’m sure Rockets fans are hoping the end-of-game momentum will carry over into the next game.

Despite leading the series 3-2, much of the pressure falls on the Blazers to follow in the Rockets’ footsteps and protect their home court on Friday night. The home teams are just 2-3 in this series, but you know it is in the Blazers’ best interests to avoid a Game 7 in Houston, so the Rockets should expect a raucous crowd in the Moda Center as the Blazers try to close the series out at home.