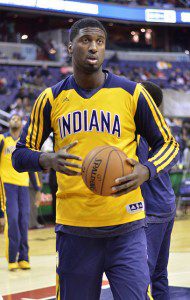 Seemingly following the same format as their first round match up with the Atlanta Hawks, the Indiana Pacers evened the series at a game a piece with an 86-82 win over the Washington Wizards in Game 2 of the Eastern Conference semifinals.

Indiana only won by four points but received a big boost behind a monster effort from Roy Hibbert. The former Georgetown Hoya, whose college coach, John Thompson III was in attendance put up 28 points and nine rebounds. It was a far cry from the horrible game Hibbert had in the series opener. With Hibbert having made his presence felt, Washington may now have to actually strategize on how they will defend him, which could turn things around for the Pacers in the quest for a title run.

Hibbert picked the perfect game to show up because a few of his teammates struggled, namely Paul George and David West. George shot 5-13 from the field, managing only 11 points. Meanwhile, West tallied only nine points in another poor showing in this series. While the Pacers struggled somewhat offensively, they hit shots when they needed to and played the kind of defense their fans have come to expect. Another deciding factor was free throw shooting. The Pacers got to the line 21 times, making 85% of their free throws, while the Wizards only got to the stripe 12 times and shot a measly 41% from the line.

In the end, the Wizards were a little to careless down the stretch to make the comeback or even force overtime for that matter. They also were nowhere near as balanced offensively as they were in Game 1. John Wall and Trevor Ariza each only scored six points as they both shot terribly from the field. Obviously, Washington must have better production from Wall, but they must also play smarter; Indiana stripped them eight times.

Game 3 will be in Washington, where the Wizards will look to get back on track and the Pacers will hope to maintain their momentum with Hibbert looking like his old self for at least a game.