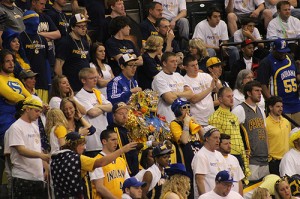 The Indiana Pacers went on the road and beat the Washington Wizards 85-63 to take a 2-1 series lead.

It was one of the ugliest blowouts you will ever seen in the sense that the Pacers won by 22 but only scored 85 points. However, when you play the kind of defense Indiana played and you turn the ball over like Washington did, these things happen. In the Wizards two losses, ball control has been an issue and things really unraveled in Game 3. The Wizards turned the ball over 18 times, six of those were committed by point guard John Wall. Couple that with the Wizards shooting 33% from the field and you get a really ugly game.

23-point scorer Paul George said, “This was probably the ugliest game of the postseason thus far. This is our style of basketball. Every now and then this team is fortunate to get hot offensively, but what we do is play defense.” It is the truth. Defense is the calling card of a Pacers squad who may be finally turning things around after getting off to a slow start. They also got help from their frontline as George, David West and a revived Roy Hibbert all score in double figures. It was the subtle domination fans had come to expect from their Pacer team.

Meanwhile, the Wizards have to find their shooting touch as they struggled to score; not because they couldn’t get quality shots but because they couldn’t make any. Washington was held to 30 points in the second half as the Pacers had just enough momentum offensively to pull away from the upstart Wizards. Once again, free throw shooting was a problem as Randy Wittman’s squad shot 11-21 from the stripe.

Like Game 2, this was a tight match until midway through the third quarter when they Pacers asserted themselves defensively. At the end of the day, the Wizards have to score lots of points if the want to win this series, seeing as the Pacers are not looking to score 100 a game.

The Wiz will get a chance again at home to even things up Sunday night but if they shoot like they did in Game 3, expect another Pacer win.