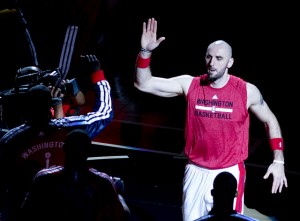 Marcin Gortat shared in the postgame disappointment Thursday night after the Wizards season came to a close thanks to the Indiana Pacers. Whether the pending free agent center will be part of Washington’s roster is one of the main questions he and the franchise face this off-season…

So, what about next season? How much has Gortat thought about his NBA playing future?

“I didn’t think about that. Matter of fact I have a meeting right now with my agent. I don’t know. I would love to be here. I would love to be back here on this team,” said Gortat shortly after leading the Wizards in scoring for the second straight game with 19 points.

Wall led the NBA in total assists this season and formed a quality pick-and-roll combination with Gortat, who averaged 13.2 points, 9.5 rebounds and 1.5 blocks in 81 regular season games. He dominated the Pacers in Game 5 with 31 points and 16 rebounds. CSN Washington

The move that brought Gortat to the Wizards was considered a bad trade when it was first announced, but it worked out great for the Wizards and Phoenix Suns. The Wizards got a productive player, and the Phoenix Suns received a top-12 protected pick for this year’s draft. Gortat exceeded the expectations of most pundits, and was a dominant force at times during the postseason. He likes the city and the players on the team so it seems likely to return as long as he is not offered a large pay cut.

We are probably witnessing the first step of the John Wall-Bradley Beal duo’s ascent to greatness – turning their playoff disappointment into motivation to improve their respective games. Gortat will definitely keep that in mind as he decides where to play next. – AL