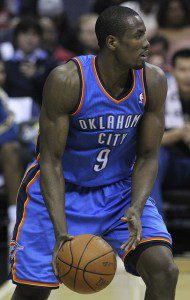 The Oklahoma City Thunder suffered a major setback Friday, losing starting power forward Serge Ibaka for the rest of the playoffs with a left calf injury.

An MRI on Friday revealed the extent of Ibaka’s injury, a grade 2 sprain, which he suffered in the third quarter of a series-clinching Game 6 victory against the Los Angeles Clippers on Thursday night.

“The severity of the injury is not long-term,” Thunder general manager Sam Presti told reporters in a conference call. “But the the timing of the injury and how deep we are in the playoffs is unfortunate.”

Ibaka averaged career-highs of 15.1 points and 8.8 rebounds during the regular season and led the NBA in total blocks (219) for the fourth consecutive season. He averaged 12.2 points, 7.3 rebounds and 2.2 blocks in 13 postseason games. Yahoo Sports

The news of Ibaka’s injury broke around 6 PM ET, and the reaction from Twitter went in many directions.

Serge Ibaka will miss rest of playoffs with Calf injury…best shot blocker in the league a “no go” vs Tim Duncan?!?!.. Uh-oh!!

Bad news: Serge Ibaka out for playoffs. Even worse news: This means Scott Brooks won’t be fired once the Spurs trounce OKC.

Part of me hopes Ibaka CAN play because I don’t want any excuses. I want the Spurs to beat OKC at its best.

And don’t worry, “The Curse of the Beard” shirts are probably being printed as we speak.

No one shared concerns that Serge Ibaka would be out for the remainder of the playoffs when he exited Game 6 versus the Los Angeles Clippers so this feels more shocking than most season ending injuries. The crazy thing is that the Thunder would have suffered series losses to the Memphis Grizzlies and Clippers without Ibaka, but might blast past the Spurs anyway. Ibaka’s perimeter shooting, rebounding and defense are extraordinary assets, but the Spurs’ primary issue is having no way to match up versus Kevin Durant or Russell Westbrook, two of the top ten players in the world. Besides, Tony Parker is fighting through a recurring hamstring injury.

Outside of the Indiana Pacers, no team has a starting lineup without a lingering physical injury (the Pacers’ issues are existential). Everyone has to deal. – AL