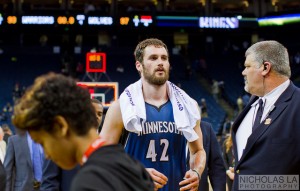 A flurry of reports this weekend indicated that the Timberwolves may be weighing the possibility of trading Kevin Love, with a host of teams positioning themselves to land the All-Star power forward.

The 25-year-old Love is under contract for $15.7 million next season, but he has the ability to exercise an early termination option in his contract and become an unrestricted free agent next summer. Former Timberwolves GM David Kahn, who was fired last year, foolishly offered Love a four-year rookie extension, with an opt-out following the third year, rather than a five-year deal that would have kept Love in Minnesota through the 2016-17 season.

Despite making three All-Star teams and regularly placing among the league’s leaders in scoring, rebounding and Player Efficiency Rating (PER), Love has yet to make the playoffs — or even finish above .500 — during his six-year career. Following coach Rick Adelman’s retirement back in April, Love is now set to play for his fifth different coach since he was selected in the 2008 lottery.

Reports of Love’s unhappiness have popped up intermittently in recent years. Back in February, Timberwolves president Flip Saunders steadfastly denied that Love had requested a trade. With the 2014 draft lottery drawing set for Tuesday, the chatter around Love has increased to what might be an all-time high. Sports Illustrated

Hasn’t this been a story for three years already:

You’ll have to excuse me if I’m not excited about this same ol’ song and dance.

The one extra wrinkle is that every team interested in Carmelo Anthony is also in the running for Love. I don’t even know if that means simply that those particular general managers are interested in improving their rosters with one of those two perennial all-stars, or that the rumor mill is making easy connections because they seem obvious. Hopefully this story goes somewhere beyond posturing in the next few months.

By the way, Sam Mitchell doesn’t move the needle as a head coaching candidate. Just throwing that out there.