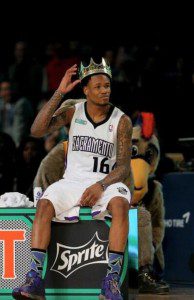 The draft class of 2013 brought with it one of the most jumbled, difficult-to-analyze groups of talent to date. The first overall pick went to a Cleveland Cavaliers team desperate for a standout player with stature comparable to that of Kyrie Irving and LeBron James, Cleveland’s most recent top overall selections. They instead landed Anthony Bennett, who can’t be considered a bust because nobody in their right mind foresaw him going first overall, as demonstrated by Bill Simmons’ shrieks of surprise when the selection was announced by David Stern. So began the overly romanticized process of introducing a new group of players to a league which promises nothing to even the most talented prospects.

The Sacramento Kings selected Ben McLemore seventh overall, a steal toward the middle of the lottery in an especially thin draft class. The young guard out of Kansas had the athletic build and perfect stroke to be one of the best shooters in the league, and a bright spot on a Kings team in need of a young asset.

McLemore’s 37.6 percent shooting from the field this season wasn’t as efficient as the Kings would have hoped, as he appeared to be the best shooter among rookies. Especially with a team relying on Isaiah Thomas to provide floor spacing and three-point production to allow DeMarcus Cousins to work the ball inside the paint, McLemore’s three-point potential makes it nearly impossible to hold him accountable for his 32 percent shooting from long-range. The fact is that a player with the promise to fill Sacramento’s offensive gaps needs to be given the time and in-game minutes to do so, and McLemore’s ability from deep is too tantalizing to give up on quite yet.

If the Kings do continue to give McLemore increased minutes (which is likely) to improve his shooting and scoring efficiency, his ceiling is as high as anyone’s. The intensity and speed with which he changes ends of the floor in transition are noticeably rare when one considers he’s thought to be a pure catch-and-shoot player. His leaping ability and potential to become a great player off the dribble and while attacking the basket create a possible goldmine for Sacramento if the team is patient enough to reap the rewards.

With his offensive build, success is probable. His shooting stroke is too impeccable to overlook, even if it doesn’t match the struggles he had throughout his first year in the league. Sure, he didn’t pan out immediately and become the successful offensive player we wanted him to be. Sure, his story is eerily similar to that of Jimmer Fredette’s, whose name has been diminished from excitement and perennial hype to that of a silent player struggling to survive in the league. But the makings of one of the league’s best offensive players are there.

For McLemore, his first-year struggles became less and less evident with more experience and a bigger role in Michael Malone’s offensive game plan. This is likely to continue into the 2014-15 season as the Kings’ trust builds in their bright investment.

His game is comparable to that of the Golden State Warriors’ Klay Thompson—arguably the best catch-and-shoot player in the league—whose efficiency took a while to show itself, much like McLemore’s. Once the transition to NBA game speed and three-point range clicked for Thompson, his success with the ball in his hands followed; he has refused to slow and has grown into a great long-range shooter.

The same and more can, and likely will, become reality for McLemore. He has a release and stroke as perfect as Thompson’s, with more athletic ability and a greater presence in transition. Neither of the players are particularly effective at putting the ball on the floor in a half court set, but once McLemore matches the three-point efficiency of Thompson, he can be a better offensive player with his fast break presence and immense speed.

As one of the NBA’s worst teams in transition, the Kings need some way to utilize McLemore’s ability to fly in fast breaks and get himself to the free-throw line for easy buckets. It was apparent in his first season that he needed those simple points to start off a decent scoring game, but the Kings have no ability to create defensive stops and allow McLemore to run in transition with Derrick Williams and Rudy Gay. If the team continues to grow defensively, he could see huge improvements with easier points on the offensive side of the ball.

However, if the Kings do indeed decide to keep their eighth overall pick and select Aaron Gordon out of Arizona in the upcoming draft, his added defensive capabilities and transition power could help push McLemore to his next level. The three-point shooting will come, but his consistency with finishing in transition needs honing. He holds the athletic potential to be great in the fast break, but McLemore’s surrounding cast needs to consider just how unstoppable an efficient shooter and transition player he could be.

Ben McLemore’s standing among the NBA’s top shooting guards will ultimately be decided by how much room and time he’s given to grow. For Sacramento, the pieces needed for a top-five 2-guard are waiting to be put together and surrounded with the talent to let him thrive offensively and become the franchise guard many anticipate.