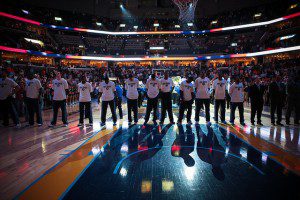 Baller Mind Frame’s The Latest NBA Dope brings you the hottest NBA stories on the web mixed with personal opinion from our very own Aaron Lanton. Check it often and absorb the knowledge we’re dropping on you!

The Memphis Grizzlies are secretly an organization with a history of bad front office breakups and emotional, impulsive decisions based on nothing concerning the basketball court.

The most recent tornado of confusion began with the firing of Grizzlies’ CEO Jason Levien. He was fired by Robert J. Pera, the principal owner of the Grizzlies as of June 2012. The Levien-Pera dynamic was summed up neatly Grantland’s Bill Simmons.

We see it happen with professional sports franchises every so often: You have a sports-savvy, overly ambitious executive who doesn’t have nearly enough money to purchase his own team (in this case, Grizzlies CEO Jason Levien) sniffing out an available franchise, then slapping together an ownership group hinging on someone else fronting the bulk of the money (Grizzlies owner Robert Pera). Usually, the ambitious executive smartly picks a sugar daddy who doesn’t know what he’s doing – or even better, might eschew the day-to-day responsibility of running the team – allowing the CEO to “run” the team without owning it.

Only one problem: If the sugar daddy owner decides to get more involved, the CEO is eventually screwed. First the owner starts spreading his wings a little more, then a little more (and in Pera’s case, so much more that he reportedly started promising playing time to different players). At some point, he starts butting heads with the ambitious CEO. Everyone else in the organization picks sides. Ultimately, there’s a major disagreement that concludes with the owner saying something like, “Hey, where’s YOUR money? I’m the one who owns the team – why are you telling ME what we should do?” That’s usually when the CEO starts packing his office and becomes “former CEO.” Which is what happened to Levien, who earns some blame since he has abruptly left three different NBA franchises now (twice on bad terms). He’s no victim.

To be clear, Levien is no angel. His spotty NBA background is well known but it doesn’t seem clear that Pera understood the consequences of firing multiple front office people and allowing several unaddressed rumors to spin. Consider this: If free agents are turned off by the drama with the Los Angeles Lakers and New York Knicks, why would they ever consider coming to a small market like Memphis?

Early reports last week indicated that Grizzlies’ head coach Dave Joerger was going to be fired. A few days later, the Minnesota Timberwolves were given permission to speak to Joerger about filling their open slot at head coach. Interim general manager Chris Wallace iterated that the Grizzlies wanted to keep Joerger, but this was a unique opportunity that would allow Joerger to be closer to his family – a fair reason to give since we know that sports organizations always put family before, you know, business. During Joerger’s negotiations with the Timberwolves, many rumors were already swirling about Joerger’s replacement from trading to acquire Tom Thibodeau from the Chicago Bulls (the Grizzlies have almost nothing desirable to offer) to rehiring Lionel Hollins. Every coach worth their salt was already considering two important grizzly factors.

The situation reeks of instability which is not something anyone wants to say about their job. It’s like the pandas have a mole in the Grizzlies’ front office.

After a bunch of panic, Joerger is staying with the Grizzlies. Depending on who you ask, he’s staying because he just couldn’t leave the players, or because the Grizzlies were asking too much in a trade for Joerger. Either way, it looks bad for a team that almost defeated the Oklahoma City Thunder in the first round despite some funny business and injuries for Game 7. Pera expressed optimism on Twitter.

@tommy_ewing We are so close…I can feel it. I think we just need to be tighter as a team between Dave,myself,FO,players

The Memphis Grizzlies have five months to find solidarity before the regular season begins anew.