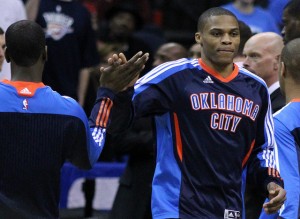 There came a point in the third quarter of Tuesday night’s game between the San Antonio Spurs and the Oklahoma City Thunder, after the Thunder had built a 76-53 lead with 3:47 left, where the top-seeded Spurs were playing so hideously, one would assume they were watching a Michael Bay movie rather than Game 4 of the Western Conference Finals.

The game started in favor of the Spurs as they went off on an easy 8-0 run in the first minutes, not giving two thoughts that they were playing inside the lily-white atmosphere of the OKC home crowd. Everything was even coming up San Antonio as Reggie Jackson (Oklahoma’s third leading scorer) went down with only 8:25 left in the first. This only fueled OKC’s fire and they charged back, stealing the lead 26-20 at the close of the quarter after going on a 13-4 run. The second quarter mirrored the first, only with the stubbornly resistant Jackson limping back out onto the sidelines from the locker room. Tim Duncan tried in vain to get his Spurs back on top as he hit a jumper in order to cut OKC’s lead down to 6 with 6:20 left in the half, but Russell Westbrook and Kevin Durant weren’t having any of it. Both had combined for 24 points out of the Thunder’s 36 total points, and continued to dominate both ends of the court. Westbrook managed to capture another steal and drove hard for the slam, which brought the Thunder up 42-32. OKC would lead at the half 58-43 after shooting 51% and not committing a single turn over.

Third quarter started with Jackson actually back in the game itself, and assisting Durant for a dunk, which would push OKC’s lead to 60-43 early on. The Thunder had outscored the Spurs 21-0 in fastbreak points with 7:44 remaining in the third. Around this time, Spurs’ Manu Ginobili passed Bill Russell to become the all-time leading scorer in the NBA postseason history among left-handed players. With his Spurs down 23 points, Popovich made the decision to sit his big three (Tony Parker, Ginobili, and Duncan) as OKC took the third leading 83-67. Westbrook and Durant had a combined 57 points through three quarters, while the Spurs, in their entirety, had only 67.

San Antonio’s bench had a slight spark and managed an 18-7 run in the fourth, but the spark was snuffed as Westbrook remained in the game. The Spurs would cut the Thunder’s lead to 12 points with 3:31 remaining in the game, but that’s about as close as they would get in the final throes. The Thunder would take Game 4 105-92, much of their thanks going out to Westbrook, who was the first player with 40 points, 10 rebounds, and 5 steals in a playoff game since Michael Jordan (back in 1989).

The former hypothetical projection that the whimpering Thunder would go down in five games as been colorfully scattered into the wind and now the Spurs must atone for their underestimation by outlining a stable plan as they head back to San Antonio. A plan that includes slowing down an unyielding Russell Westbrook, silencing the vigor that was injected into the veins of OKC after the return of Serge Ibaka, and making sure you don’t find yourself on the opposing end of a Gregg Popovich death stare. Short of it? The impotent-appearing Spurs need to stop looking as if they are the spokesmen of Depends diapers and ditch the walking can in order to send the Thunder back into a state of utter dread.

Game 5 is on Thursday at the AT&T Center in San Antonio.