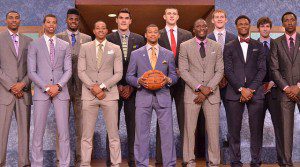 After watching this year’s NBA Draft Lottery, most NBA fans with half a brain have to admit something fishy is going on. Cleveland winning two years in a row? Three out of the last four years? The odds of that happening are 2000 to 1. Do the math.

Immediately following the Lottery, ESPN suspiciously cut to the pre-game for game two of the Pacers vs. Heat, and Bill Simmons was scoffing and rolling his eyes. “New rules!” he said, “There has to be new rules.” A lot of people agree. He was cut short, as well, by commercials.

First of all, what is up, in the last several years, with the goddamn Envelopes?!? What happened to the ping-pong balls? Why not conduct the draw in public? That way no one could question the results.

If the Lottery is, in fact, rigged…why the Cavs again? Fake NBA karma, maybe still repaying the loss of LeBron. Let’s dive a little deeper. Sure, the Lottery is always plagued by conspiracy theories, but the fact is the NBA thrives on two things: rivalries and storylines. They may be one in the same, but both avenues sell tickets. The NBA learned this in the 80s with Celtics vs. Lakers, Magic vs. Bird

There are no story lines involving the Bucks, or the Magic, or even Philly for that matter. Until the Bucks and the Magic start fighting and one of the players sleeps with another player’s wife, then there is nothing to sell there.

Note to irrelevant teams: Go do something controversial and start a storyline. Your draft order and TV ratings will improve. Even Donald Sterling will agree with this.

LeBron returning to Cleveland would be the ultimate storyline, but aside from that, maybe this draft helps the Cavs become good enough to face LeBron in the playoffs, and that is an equally sellable storyline. The East is so weak that this could happen next year!

One can look back on the entire history of the draft lottery and find little fishy details supporting a rigged presentation. The first draft lottery involved Ewing to New York; In 1992 Shaq to the brand new Orlando Magic; LeBron to his hometown; Anthony Davis to the NBA-owned Hornets.

No coaches, anchors, or sportscasters, even Bill Simmons, will dare outright challenge the status quo, because it’s the NBA who is cutting their paychecks.

Ultimately, Conspiracy is probably the wrong word. Business might be the right word. It is all understood. With the exception of OKC, small market teams are ultimately doomed. Storylines sell. So the key is to make storylines.

There might not be any backroom cloak and dagger meetings, but it is just corporate common sense for any business to know that the business needs to constantly continue to grow and foster sales.

It is just fishy. We all love basketball, but remember that the NBA is a business. It’s time to be more critical.