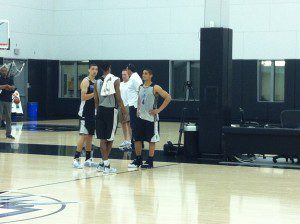 Image courtesy of Nirvan Sorooshian. Several lottery hopefuls have made the trip to Sacramento to workout for the Kings.

For as much scouting and preparation there is that goes into it, the NBA Draft becomes an annual crapshoot for many teams. For almost every star in the league, there is a legion of busts on the end of benches or out of the NBA altogether.

The Sacramento Kings, in particular, have fallen victim to the inherent risk involved in drafting undeveloped talent. In three of the past five drafts they’ve taken Thomas Robinson, Jimmer Fredette, and Tyreke Evans ahead of the likes of Damian Lillard, Kawhi Leonard, and Stephen Curry, respectively. None of those selections even play for Sacramento any longer, which is alarming considering they were each top-10 selections.

It’s unavoidable and happens to every team, though the hits typically sweep the misses under the rug.

This year, perhaps more than ever, the Kings find themselves in a precarious position once again. Since at least a year ago, three prospects have separated themselves from the pack as the draft’s elite talents. Those players are Andrew Wiggins, Jabari Parker, and Joel Embiid (obviously the news about Embiid’s foot surgery complicates this). Beyond that group are four players who have carved out a second, defined tier. Dante Exum, Marcus Smart, Julius Randle, and Noah Vonleh make up this latter group.

With the Kings selecting eighth overall, they’re just on the outside, looking in at the top talent in the most anticipated draft class in a decade.

They could draft eighth, but, because of the defined drop off between the seventh and eighth picks (assuming the seven aforementioned players go in the first seven picks), taking someone No. 8 would minimize Sacramento’s potential gains.

A couple of players the Kings would likely take a look at selecting with the eighth pick are Doug McDermott and Aaron Gordon. The former has a terrific shooting stroke and was a prolific scorer in college, though he lacks athleticism and played in conferences with mediocre competition. The Kings already rolled the dice on a similar player in Fredette and would be foolish to do so again. The latter player, Gordon, is very athletic, and projects to be a good defender and probably rebounder also, but can’t score much and may not have a position. Does that really sound like something you can’t get later in the draft?

Neither option is particularly tantalizing at Sacramento’s position in the draft, and selecting anyone else would probably be a reach, which is why the Kings should strongly consider trading down (and probably already have done so).

While the drop-off between the seventh and eighth picks in this year’s draft is noticeably large, there’s a much more gradual decline in the 8-20 range. There’s a mix of proven upperclassman, European prospects and one-and-done talents there.

Rather than just sticking with what fate (see: NBA Draft Lottery) has given them, the Kings would be better served shaping their draft destiny themselves by maximizing what they walk away with. By trading down, Sacramento could pick up a veteran, proven player and draft someone whose ceiling is comparable to whoever would be available at the eighth pick.

Teams like the Denver Nuggets, Orlando Magic, and Phoenix Suns have deep rosters, but may be inclined to exchange some of that depth for a higher pick, depending on how their draft boards look.

Another option the Kings may have is to trade up.

Embiid’s surprise injury shocked many and may end up significantly shaking up the top of the draft. If he falls as far as four or five (there’s no way he gets past the Boston Celtics or Los Angeles Lakers at six and seven, respectively), the Kings should pounce if they can find a willing trade partner.

What Sacramento needs, perhaps more than anything, is a shot blocker to pair with their dominant young center DeMarcus Cousins. Embiid would be ideal because he would move Cousins over to the power forward position, where no one in the league would be able to guard him; most centers already get plowed over by Cousins. Forcing teams to decide between throwing their power forward at Cousins or Embiid would be a lose-lose scenario.

Of course, this would all depend on the health of Embiid going forward, which is questionable at best. He was kept out of the NCAA Tournament by a bad back and the recent revelation about his foot may be even more damning. From Bill Walton to Yao Ming, there’s a trail of über-talented centers that have fallen victim to foot injuries.

There is a lot of risk involved in trading up to get Embiid (Sacramento would probably have to pair Ben McLemore with the eighth pick to move up to fourth or fifth), but the potential reward is massive and worthy of such risk.

On the other hand, trading down wouldn’t increase risk, but the reward of adding a veteran and a marginally less appealing X-teenth pick, as opposed to the eighth pick, would yield a bigger catch than standing pat at eight.

If the Kings intend on drafting in their slotted position, they’re in a difficult spot and may end up kicking themselves a few years down the line, but drafting eighth has opened their options up immensely. They’d probably be less inclined to move up or down if they were slotted seventh, and would most likely elect to take whoever fell to them instead.

While that would have meant surely getting someone talented, the fate of their selection would have been decided for them by the six preceding teams’ picks.

In the position they find themselves now, the Kings have the opportunity to assess every option and pursue the best one with little or no scrutiny.

Over the last year, Sacramento’s new front office has been aggressive in acquiring talent and reshaping its roster, a mentality it’s sure to carry into Thursday night.