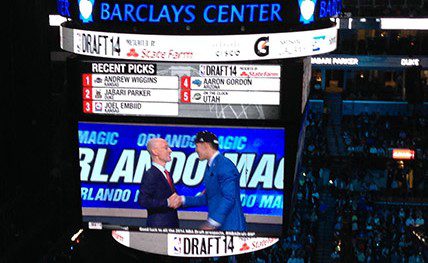 The 2014 NBA Draft was a night filled with much anticipation, cheers and boos as one would expect from a crazy night. That goes doubly for the Orlando Magic as the brain trust made a couple of surprising picks, much to the fanbase’s chagrin. Nonetheless, the Magic managed to bring in exciting and dynamic talent while filling needs at the same time. So let’s introduce them.

First up, we have the University of Arizona’s Aaron Gordon who was taken fourth overall in the 2014 NBA Draft. Aaron Gordon is a 6-foot-8 versatile forward with crazy athletic abilities reminiscent of Blake Griffin coming out of Oklahoma. His numbers don’t jump out at you as he averaged 12.4 points and 8.0 rebounds, but his advanced statistics were impressive as he finished his lone season as a Bearcat with a .503 TS% and a .516 eFG%. It is also fair to mention that Gordon also shot a porous .422 FT% which shows he has a lot to do to improve his offensive game, as it is one of his weaknesses. While Gordon’s offense may need some fine tuning, it is on the defensive end where he really shines. Gordon is a fundamentally sound and elite defender as proof of ranking first in the Pac-12 with an 88.6 defensive rating as well as first in not only the Pac-12, but the NCAA entirely with a 3.3 Defensive Win shares. The jury is still out on whether Gordon was worth being taken top four, but the Magic obviously seen something in him that was worth taking so it’ll be fun to watch him over his career in Magic blue.

Next we have Elfrid Payton of the Louisiana-Lafayette Ragin’ Cajuns. Payton is a 6-foot-3 point guard who was a bit of an unknown starting out as a freshmen, but would quickly open eyes when he played for the U.S. Men’s basketball team for the 2013 U-19 FIBA World Championship with none other than his future Magic teammate, Aaron Gordon. After winning the Gold Medal game, Payton would use his experience and explode on to the college nation averaging 19.2 points, 5.9 assists, and 6.0 rebounds while posting a .551 TS% and a .524 eFG%. Like Aaron Gordon, Elfrid Payton is also an athletic, above-the-rim type player with great floor general abilities, a penchant for decimating teams in the paint, and playing tenacious defense. His weakness is also his perimeter shooting, but he displayed a much improved jump-shot which aided his stock’s meteoric rise before the draft. Although it took some assets, like a 2017 first round pick that may or may not turn into a 2018 second round pick, the Magic were able to get it’s point guard of the future in Elfrid Payton and will be interesting to see how he handles running his own team.

Last but not least we have Iowa’s Roy Devyn Marble – a 6-foot-6 shooting guard – who was taken with the 56th overall selection in the second round. Marble throughout his career averaged 12.5 points, 3.4 rebounds and 2.9 assists per game which includes an impressive senior season average of 17.0 points, 3.2 rebounds, and 3.6 assists. While Marble could provide depth for the Magic off the bench, he’ll most likely be sent down to the D-League to develop thanks to the Magic and Erie Bayhawk’s new one-on-one hybrid partnership which should serve him well.

At the end of the day even though the players selected weren’t what fans were expecting, it won’t take long for them to see Gordon, Payton, and Marble in action as the Orlando Pro Summer League takes off next Saturday on July 5th. So enjoy your Independence day folks. The real fireworks are set to go off when the referee tips the ball.