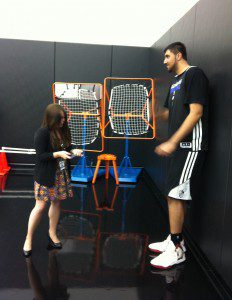 Even in a league holding the most athletically imposing and impressive men in sports, the NBA rarely gains a player with the overwhelming size and strength of Sim Bhullar. As he entered his pre-draft workouts with various teams around the league, the possibilities of what his size could bring to the table arose immediately.

Although he went undrafted Thursday night, the big man has been signed by the Sacramento Kings, giving him a chance to utilize his jaw-dropping stature.

At 7-foot-5, Bhullar’s game is overshadowed by his size. The Kings see the unpolished paint player as a project which holds promise, as centers his size only come a handful of times each decade.

When Bhullar left New Mexico State and declared for the draft after his second year, analysts and professional teams saw his 300-pound stature and 7-foot-9 wingspan as a dream come true if utilized correctly.

Bhullar was projected as the 80th-ranked prospect entering the league, well out of the second round and seemingly out of reach of the NBA. But after a workout with the Kings in which management viewed his size as a potential paint-clogging nightmare for offensive players.

He’ll likely start his career in the D-League program, waiting for a chance to get the call to come play in a Sacramento uniform. That said, it may be sooner than he thinks if he impresses in his summer league campaign.

The Kings lack depth on the bench. Behind DeMarcus Cousins is Reggie Evans and Aaron Gray, which is stretched thin as Evans often shared minutes with Jason Thompson at the power forward position for much of last season. This opens the door for Bhullar to enter the roster in a few regular-season games and prove his worth to the team which gave him a chance to play basketball professionally.

The possibility of a Bhullar-Cousins tandem is tantalizing if his growth matches his enormity. He clogs the paint furiously, with the length to block and contest shots to allow Cousins to focus his energy on the offensive side of the floor. If Bhullar does make it up to the Kings team, Cousins could see more minutes at the power forward position, one of the team’s weakest links as Thompson doesn’t provide the offensive production or defensive ability to be anywhere close to a problem for opposing teams.

This signing sends clear signals that Bhullar could see real NBA minutes. He’ll have to prove that he can be a reliable backup for Cousins, and that his size will be utilized, particularly on the defensive side of the ball.

“I think I can definitely protect the rim, that’s the big thing I can bring to any team,” Bhullar said. “Clogging the paint and making it hard for guys to score easily around the basket, [as well as] rebounding the ball and being a big guy on the court who can impose his will on guys.”

Especially with a defensive-minded coach in Michael Malone, Bhullar’s defense in his D-League experience will decide whether or not he gets professional minutes.

Bhullar has been acclaimed as one of the only seven-footers capable of stepping out and knocking down mid-range shots when called upon. This is especially impressive when considering his 64.8 percent from the field, as not all of his buckets come from post work and inside the paint. With the possible successes his game may bring to the NBA from his low post presence, rim protection and ability to hit jumpers, Bhullar’s upside is quiet but present. Malone and the Kings have taken notice.

“[Malone] told me I’ve got a good frame to work with, good skill level, that I can shoot the ball and that I’ve got great hands. It’s just the cardio and getting my body in shape and then I can be a hell of a player,” said Bhullar.

Sacramento has made it clear that it sees something in Bhullar’s game. Whether it’s his size or ability to clog the paint, he brings a defensively imposing frame with him that will cause problems for most of the league’s guards driving to the rim. Even if he is utilized only to give Cousins some rest on the defensive side of the ball and stop easy layups from going up, Bhullar brings something to the table which has impressed the Kings enough to give him a chance.

It’s something the Kings’ organization has shown in the short time Vivek Ranadivé has been owner, but it’s as powerful nonetheless. Sacramento understands that gathering a young core with the most potential upside is what could ultimately bring about a hidden star, or even a player who knows his role and can provide decent backup minutes. The team understands that exploring all options is a must, and it continues to do so with this signing.

He’s made it into the NBA, but Sim Bhullar still has much to prove for Sacramento.