NOTE: This review of episode one contains spoilers.

[dropcap]O[/dropcap]ctober 14. What happened on that day, exactly? Well, it’s three years later and the characters in HBO’s new series The Leftovers sure as hell don’t know.

Talking heads on the 24-hour news stations don’t know either, but they are still fighting over it: it was the Rapture; no it was just an unexplained event; empirical evidence will always trump the Bible theories; and so on. There are televised Congressional hearings, politicians grilling the scientists who, after all this time, still can’t deliver a conclusive answer. But what people do know is that on October 14, other people (two percent of the world’s population) simply disappeared. A “sudden departure”; and the portion of society that remains are the namesake of the show.

In a humorous moment, there’s a news segment showing an “In Memoriam” for the celebrities that we’ve lost: The Pope. J-Lo. Shaq. Bonnie Raitt. Gary Busey. It seems Amazon Fire TV isn’t the only entity that’s been paying attention to Busey’s existence after all:

The “sudden departure” itself is glimpsed briefly at the beginning of the episode. Babies crying in car seats stop crying and are simply gone. Shopping carts, once pushed by human hands, roll pointlessly into car bumpers in a parking lot. Cars careen into one another, their drivers no longer there to control the wheels. People scream out for their loved ones. The 911 operators are immediately swamped with frantic phonecalls.

But now it’s three years later, in a town getting ready to celebrate Heroes Day (their term for the people who have disappeared) with a parade, and we are slowly learning about the leftovers, starting with a storyline centering around Kevin Garvey’s (Justin Theroux) family. Garvey is the town’s police chief, who seems dead-set against any celebrations, as he is attuned to how it will only create more strife in the community between the townspeople who want to honor their missing loved ones and another group of people, called the Guilty Remnant, who want to (silently) protest the event. He fights openly with the Mayor about it. He insists his teenaged daughter Jill (who’s dealing with her own typical teen angst, regardless of being leftover) not attend the event. It turns out Garvey’s wife Laurie (Private Practice’s Amy Brenneman) is a Guilty Remnant protester. We learn in a separate scene that they also have a college-aged son, Tom, who now lives somewhere in the desert and is a member of some other type of post-event cult group. One that has a figurehead named Wayne who helps to “unburden” the people who remain.

While Chief Garvey may seem like a fortunate man (since his family was spared of any loss from the October 14 event), it’s ultimately a moot point, as the members of the Garvey family have all willingly chosen to distance themselves from one another anyway.

The first episode does a good job of introducing a gaggle of characters by dropping us right in the middle of this situation. And many questions abound! Some of which may never receive answers, thanks to the whole “we just don’t know” nature of the October 14 phenomenon.

We know Chief Garvey’s father was the former police chief until he had some sort of issues (or perhaps a psychotic break), so he’s sure to make an appearance in future episodes. 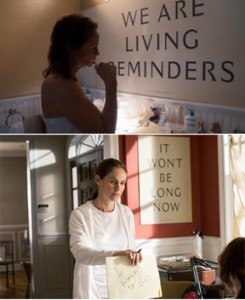 The members of Laurie’s cult do a lot of weird things like wear all white, chain smoke, take a vow of silence, hang strange signs around their compound (think the exact OPPOSITE of those ubiquitous “Keep Calm” signs), and follow people around town, silently staring at them. One of the people they stare at is Liv Tyler, who seems to have inner conflict over her impending nuptials. She later winds up at the Guilty Remnant’s doorstep looking for a few nights’ shelter. Expect more eccentricities from that group for sure.

Jill is navigating the insecurity and frustration that comes with high school life — she attends a party where a modern-day version of spin-the-bottle (using a cell phone app that contains newer, more R-rated romantic options) is played and her supposed best friend winds up being chosen by Jill’s secret crush to head off into a bedroom and do the dirty. Jill later looks around for her friend and sees her in the throes of an orgasm. No doubt we’ll be circling back to that issue later, as that’s just juicy high school drama anyway.

Tom, out in the desert, has been gently called-out for flirting with Wayne’s main girlfriend. It is now Tom’s task to keep her safe (and keep his hands off her) as Wayne informs him that in one of his dreams, Wayne’s son comes to him to let his father know that “the grace period is over,” and so now it’s time for them to go to work. But what KIND of work is he referring to? Queue mysterious music.

Finally, let’s talk about those wild dogs. Earlier in the episode, Chief Garvey is out jogging and stops in his tracks when a stray dog appears in front of him. He attempts to call the dog over to him, and just as he’s about to be successful in making contact, the dog is shot and killed by a man with a shotgun and a pickup truck. Of course the man speeds off, but that’s not the last we see of him.

Chief Garvey tries to return the dog’s collar to its owner (while the dead dog, currently in the trunk of his car, will be brought to Animal Control), but the owner acts nonchalant about the news that her dog has died, and informs the police chief that the dog has been gone for three years anyway. Ouch.

One of Jill’s classmates has a theory that many of the town’s dogs have started to go wild because they witnessed the disappearance of their owners, and it’s made them more primal. He suggests that the same thing is slowly happening to people. Creepy.

Later, Chief Garvey notices the shotgun man once again while at a bar, and (laughably) fails once again at stopping him.

We finally meet the man a third time: Garvey brings his car to a halt when he’s confronted by a (live) deer in the road. A deer he had noticed earlier on the lawn of the owner of the dead dog. He gets out to observe the animal, but then hears a pack of dogs quickly approaching. The dogs race past the police chief and maul the deer. Enter the mysterious shotgun man, who gets out of his car and begins to take aim at the pack. The man informs the police chief that these aren’t our dogs anymore, and asks if he also is packing heat. The two men begin to shoot at the animals. Gunshots and yelping ensue. Credits roll. Goodnight, America! 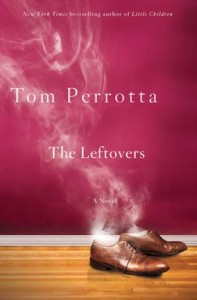 It’s a lot to absorb in its 72 minute running time, but I wouldn’t expect anything less from co-executive producers Damon Lindelof (he of Lost and Star Trek: Into Darkness fame) and Tom Perotta. Perotta, the man behind the novel on which this series is based, is probably best-known for Election, and Little Children and is adept at revealing the subtle shadows and frayed edges that exist in an otherwise picturesque suburban scene. I’m excited to see the paths that these storylines travel in the coming weeks.

The Leftovers has a ten-episode first season lined up with HBO and airs Sunday nights at 10pm.