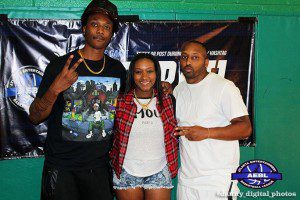 The July 4th fireworks didn’t stop on Friday. The Atlanta Entertainment Basketball League made sure that fans saw plenty of action Saturday and Sunday!

The weekend kicked-off with three games on Saturday.

The first A.E.B.L. game saw Grind Hard take on Forbes Atlanta. On paper, Forbes Atlanta should be better than their 0-3 record. The team features the talented twins Brandon and Bryan Thomas. Grind Hard came out swinging early on the twins and Forbes Atlanta and never stopped.

By the time the buzzer sounded, Grind Hard grinded to a 60-54 win over Forbes Atlanta. Grind Hard are now 2-2 in league play. Forbes drops to 0-4.

Game 2 saw the surprising Man Down Hands Down squad take on LandofFlyy. MDHD has managed to play themselves into a good position come play-off time. After 3 weeks of play, the MDHD has scrapped their way to a 2-1 record.

The MDHD teams doesn’t have the athletes that teams like Gold Gang, Street Execs or Uptown Sounds brings out. What they lack in star power, they make up for in tough play. That tough play continued into this week.

They took control of the game early and never let their foot off the gas pedal. With 4 minutes left in the 3rd, the team was up 47-28 over LandofFlyy.

They closed out the game and knocked LandofFlyy to a 0-3 record in the league with a 67-50 win.

The game of the weekend and possibly the season was Good Life Music Group taking on C.T.C. The C.T.C team is another surprising outfit. They squad plays fast and boasts a roster full of talented athletes. They came with only 6 players for Saturday’s game, so you would expect that they would’ve been the ones down 2o heading into the half.

No, that was Good Life Music Group. Heading into the half, C.T.C was up 45-27 and looked like they were going to run away with the game. 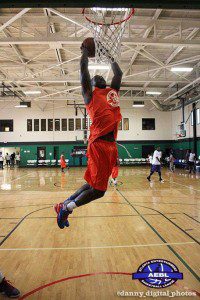 As the 3rd quarter came to a close, Good Life cut C.T.C.’s lead down to 5.Then the 4th quarter came. That’s when fans witnessed the comeback of the year. Entering the 4th, Good Life had the momentum behind them, but they still were playing from behind.

Good Life Music guard Chris Allen played big for his team this weekend. He hit a few big jumpers and lay-ups to keep his team in the mix while GLMG star Cam Tatutm rested a sore shoulder.

Cam came alive in the 4th. Shaking off of shoulder injury, he hit a few big shots to help his team move closer to catching the lead.

Everyone was anticipating overtime, but Cam Tatum and the crew expected a win. Back to back jumpers sent the crowd into a frenzy. As the buzzer sounded, Good Life managed to march back from a huge deficit to win the game 77-75!

Everyone wondered how Sunday’s games could match the hype of the Saturday’s games.

With 3 of the leagues best teams, Gold Gang, Street Execs and Uptown Sounds all playing as well as a crowd full of celebs, the hype level was going to be met.

Street Execs took on Court Cred in Game 1. Street Execs brought out their own V.I.P section for the game. Street Execs artist Cap-1, Ques of Travis Porter and more were in the building to see their squad play.

This weekend was the first time that professional players could take the court. Court Cred took advantage of that. Former Toronto Raptors forward, Jamario Moon, took the floor for Court Cred. His presence was felt early as he hit the first two buckets for the team.

After being tied for most of the 1st and 2nd, Street Execs pulled away to small lead of 34-26 as the 1st half closed.

Street Execs moved to a 3-1 record with a 82-69 win. Their lone loss comes at the hang of Gold Gang in the 1st game of the season.

The defending champions faced the team the beat to win the title last summer, Lou William’s Uptown Sounds team. If you’ve watched The “A” Game webisodes, then you know that Gold Gang and their coach J. Ross has little to no love for the Uptown Sounds team.

As the game began, you can tell that Gold Gang did not want to lose to to Uptown Sounds. Both teams came into the game undefeated.

Gold Gang had their point guard Lil D back in action this week and his play at the point opened up the paint for Jamero Davidson and the rest of Gold Gang’s big men.

Gold Gang was up early 19-13, before Uptown Sounds stole the lead quickly. Heading into the half, Gold Gang held a 2 point lead over Uptown Sounds, 37-35.

Paul Delany III, Lil D and Jayo held it together and kept the ultra-athletic, long, jump shooting Uptown Sounds on the defense for the rest of the game.

The end result was Gold Gang taking the win. Now, they sit all alone at the top of the standings at 4-0.