[dropcap]W[/dropcap]hy is Liv Tyler’s character, Meg, so mad at that tree? And will she remain at the Guilty Remnant’s Pledge House? Why are federal agents raiding Holy Wayne, the magic hugger’s ranch? Is Chief Kevin Garvey having his own prophetic dreams or is he slowly just losing his grip on reality? How many packs of smokes a day is Laurie Garvey up to, anyway?

On this week’s episode of The Leftovers we get to scratch the surface (or, er, chop the tree) a bit deeper on some of the residents of Mapleton.

HEREIN LIE SPOILERS in this The Leftovers recap. Beware.

Jill Garvey and her friend Aimee learn by accident that Nora Durst, the woman who lost her entire family on October 14, packs heat (and not just “a lady gun”). Nora is also some sort of insurance caseworker who visits and interviews families on behalf of “Departure Benefits,” having to ask such obscure questions as “To your knowledge, did your son ever travel to Brazil?” and “To your knowledge, did he have more than 20 sexual partners?” The family she’s interviewing find these questions hard to answer, seeing how their son had Down Syndrome, yet I find these questions hard to fathom, regardless of who the departed is. 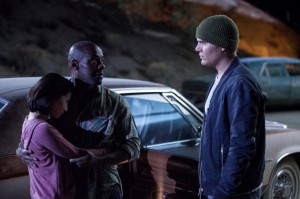 Speaking of guns, Tom Garvey, out in Nevada, shoots and kills an FBI agent in an effort to protect the life of Holy Wayne’s special girlfriend, Christine. Oh, PS – we learn that Wayne is wanted for several counts of statutory rape, so he’s got that going for him. Delightful! They then take shelter in a hidden bomb shelter on the property. The next day they meet up with Holy Wayne at an abandoned gas station (its owner seemingly killed behind the counter). Holy Wayne praises Tom for his bravery and wants to hug it out with Tom, help him release his burdens, but Tom declines. Holy Wayne is pleasantly baffled by Tom as he is the one guy he can’t figure out. When they prepare to part ways, Wayne insists on taking (and breaking) Tom’s phone, switching it for one that only Wayne can contact him on for when the time is right. Tom and Christine then prepare for what she cheerily declares as a “road trip!” but the car engine dies and Tom has a mild meltdown. Christine reassures him that everything will be okay since Wayne said so. 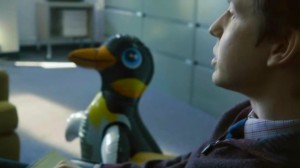 Chief Garvey is starting to wonder if anything is currently okay — having had a strange dream where his daughter’s scantily-clad friend Aimee inappropriately visits him in his bedroom. She leads him out into the snowy woods where they meet up with the dog shooter. However, this time it appears as though he’s got a Guilty Remnant follower in his crosshairs. Garvey then appears to be on fire, which startles him awake, but it’s his next door neighbor who’s actually started a fire in the backyard. Having to endure therapy sessions in the wake of all the dog shootings, Garvey recounts his dream to the therapist, who in turn begins to allude to the possibility that the “Mystery Man Shooter” does not actually exist, as the police have yet to recover the gun, pickup truck, or even the mystery man in question. After his session, the Chief goes to toast a bagel in the break room, when the Mayor informs him that she’s going to visit his father in the institution. During the course of their conversation Garvey notices that his bagels never reappear in the toaster. He shakes the machine and even turns it on its side. Nothing comes out. Did he never toast them? Like the “Mystery Man,” could they possibly not even exist? Or did they just get raptured? 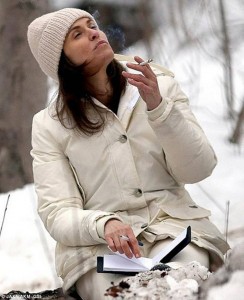 Laurie, meanwhile, is having the damnedest times getting Meg on board with the G.R. And while on a routine missing person visit to the compound, Chief Garvey meets Meg and offers her alternative help than what she’s receiving from the G.R. Patti, the leader of the group, is displeased and thinks Laurie is being too easygoing, and that the group will ultimately lose Meg. And so Laurie brings her to the woods to begin chopping down a tree. Meg questions what the point of the exercise is; and poses the idea that the tree symbolizes her old life, but Laurie doesn’t respond. In a moment of frustration, Meg yells at Laurie “Do you even remember what it feels like to care about anything?” In a moment of slight levity, Laurie writes to Meg that “you met my husband today” and gestures to the Chief’s business card, to which Meg replies “The hot cop?”

And now back to Chief Garvey. The pickup truck turns up (mysteriously, natch) in his own driveway! There is a dead dog in a trash bag in the back! Later that night, the Mystery Man Shooter appears on his doorstep with a six-pack and an invitation to set up camp at dawn to pick off a new group of a dozen or so wild dogs that he’s seen roaming behind the local school. Garvey asks the man his name, but he calmly declines. Jill and Aimee arrive home and see the man so, okay, Garvey is now somewhat convinced that he did not conjure up Mystery Man. Right? The man even hands the six-pack to Jill, so tangible contact was made. This is no Tyler Durden situation afterall.

The Chief declines the dog shooter’s offer to go hunt dogs. He instead visits his father at the institution. While watching Perfect Strangers on TV, the father informs Garvey that Cousin Larry, Balki, Jennifer… they were all raptured. The older Garvey seems pretty “with it” for a man sitting among catatonic patients in a common room; he even asks “How’s my house” and “How’s my job,” letting the viewer know that Kevin is merely living in the shadow of his father’s life. For a police chief he is suddenly cast in the light of an unsure, confused child. He asks his father when he thought everything started to change for him. The father insists that his sh*t has, in fact, stayed in tact. And yet he’s in this institution; and yet he starts to speak to an imaginary person, and then tells his son that “They said they’re sending someone to help you,” but he should keep that news to himself. These are perfect strangers, indeed! 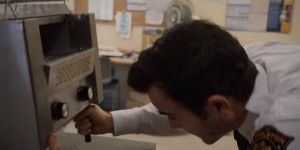 Still questioning reality, Kevin returns to the police station, determined to find those bagels (and his sanity). He brings a chic bag with tools with him (I guess a small-town station wouldn’t even keep a basic Phillips head available in a desk drawer?). He’s successful in his hunt as the charred bagels are retrieved from the unit, so the Mayor didn’t punk him and swipe his breakfast, afterall. Nor was the bagel raptured up to Gary Busey.

The next morning, Patti comes to Laurie with a sign that says, “SHE’S GONE,” alluding to Meg. But the viewer quickly learns that no, she did not leave the G.R. in search of hooking up with the hot cop, or even to return to her own handsome fiancée. Instead, having admitted to Laurie earlier that “I don’t want to feel this way anymore,” Meg has gone back to the woods for another attempt at Johnny Appleseeding that pesky tree. I think someone’s almost ready for her first pack of smokes!