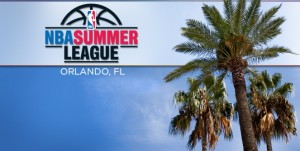 The NBA’s Orlando Summer League (OSL) kicked off on Saturday, and it’s an exciting time. You get to see your respective team’s heralded draft picks in action to get a glimpse of the potential they possess, and everybody on the court is raring to show off their skills. This is especially apparent in guys who either were taken in the second round or went undrafted. Since they do not have the luxury that first round picks, or guys that have guaranteed contracts have, the Summer League is more or less an audition for some players to impress team representatives enough to get invited to the other Summer League held in Vegas, or earn the coveted camp invite.

As we take a look at the Orlando Magic’s Summer League roster, there are several interesting prospects who may push for that precious camp invite. It is important to remember that the Magic only played one Summer League game so far and that things could change by the time it plays its last game. Still, these players played well enough, and presumably have the talent to make my watch list: Kim English, Seth Curry, Cameron Jones, Kadeem Batts, Josh Magette, Deyvn Marble and Romero “Big Roe” Osby.

Starting with the Magic familars, Osby and Marble are both second round picks for the Magic who probably made the biggest impressions in game one of the OSL. Already with one year of Summer League and D-League experience under his belt, Osby came out the gates running. Showing off his improved jumper, Osby went 4-of-6 from the field for 10 points while bringing down three rebounds. He showed great poise and was one of the vocal leaders on the court in what was a solid game; it was Osby’s first action since suffering a season ending shoulder injury during his time with then Magic’s D-League affiliate, the Fort Wayne Mad Ants.

Marble was a bit of an eye-opener for fans. Right out the gate, the former Iowa Hawkeye drilled his first of two three-pointers and had a couple of breakaway dunks on his way to finishing the game with 13 points and five rebounds, while going 5-of-7 from the field. Marble showed he has a smooth jump-shot and can play tenaciously on defense as he came away with two steals on the day. The key with Marble is consistency, as he is known to be a streaky shooter. If he can continue his level of play heading into a matchup against the Houston Rockets, he’ll have a pretty good chance of making the camp roster.

The non-Magic Summer League invitees can also make a case to grab one of the few roster spots for the Magic heading into the Fall. English and Curry – younger brother of NBA superstar Stephen Curry – gained momentum as well. English started the game, helping the Magic get off to a fast start against the Philadelphia 76ers, and served as a stabilizer when the team went through a rough patch. Curry came into the game to give the Magic the boost it needed, draining a couple of key three-pointers to help the Magic stop the bleeding in the second quarter. Although neither player cracked 10 points on the day, they both made key contributions that helped the team ultimately get the win and would have to continue making key plays to be considered for a camp invite.

While these players didn’t get a chance to play on Saturday, Luke Hancock, Jones and Magette are all players whom fans should pay close attention to. If you watched the NCAA the last couple of years, you should be able to recognize Hancock, a 6-foot-7 small forward who is best known for scoring 12 consecutive points in the first half of the 2013 NCAA Championship. Jones is a 6-foot-4 combo forward who comes to a Summer League team as a former teammate of Seth Curry and the Magic’s Dewayne Dedmon, from their days as Santa Cruz Warriors. Jones averaged 20 points, 4.3 rebounds and 3.5 assists while shooting 46.3 percent from the field and 40.4 percent from three in 36 minutes per contest. Magette has the biggest chance of most of the guys on the watch list to earn a camp invite from the Magic. Playing for the Los Angeles D-Fenders, Magette averaged 10.3 points and 6.9 assists on 42.0 percent field goal shooting and 37.7 in three-point shooting. He also lead the D-League in assist-to-turnover ratio at 4.3. With the Magic waiving Ronnie Price and the beloved Jameer Nelson, look for Magette to get serious consideration to fill the point guard depth for the Magic.