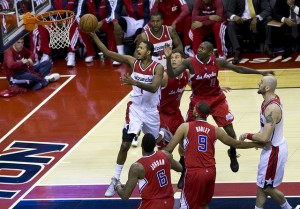 Brought to you by our friends at Fantasy Image courtesy of Keith Allison/Flickr.

Pat Riley has now started his efforts to keep the Miami Heat at the top spots of the NBA for the next seasons. The 69-year-old Hall of Famer has already made his pitch to LeBron James, Dwyane Wade, and Chris Bosh and he is now trying to prove to his Big Three that he can find all those necessary pieces to surround them. Two of the Heat’s top targets this summer are Luol Deng and Trevor Ariza. Riley has reportedly already met with Deng’s representatives while Ariza still remains as one of the top fits for the Heat, if they manage to re-sign the Big Three. So, how could Deng or Ariza really help Miami move forward? Are they good enough to place the Heat deep into championship contention next season and can the Heat really afford them?

There are two scenarios.

The first one, which is the best one for Miami, includes Riley somehow managing to find all those quality role players needed to complement the Big Three and persuade them to agree to take less in order to come to South Beach. In that case, the Big Three “fall” for Riley’s master plan and they all reach respective agreements with the Heat, choosing to stay in Miami rather than seek for other destinations. The other scenario includes the Big Three parting ways, leaving Pat Riley with the hard task of trying to save the Heat’s future.

In the first scenario, either Trevor Ariza or Luol Deng would be excellent fits for this Miami team. Both of them are proven veterans, with much experience but also the fresh legs needed to quickly adapt to the Heat’s energetic playing style. Both of them can take over during some stretches of the game but neither Deng nor Ariza will really emerge as the star of the team.

The good news is that they don’t have to. So, Deng won’t have to take the biggest offensive load, much like he did during his Chicago Bulls days due to Derrick Rose’s lengthy injuries. Instead, Deng can focus on what he does best, playing lock down defense and providing as much offense as he can. Luol Deng is one of the most aggressive forwards in the league and he fits perfectly with Miami’s tough defensive system. The 29-year-old former All-Star finished the 2013-14 regular season averaging 16.0 points on 43.1 percent shooting from the field. Although he was the Bulls’ most productive player before he got traded, after he was sent to the Cleveland Cavaliers he wasn’t that much of a factor for his new team.

If Trevor Ariza agrees to join the Heat, he can provide a reliable shooting option from beyond the three-point arc and top perimeter defense. Ariza proved last season that he can be a solid contributor, as he averaged 14.4 points on 45.6 percent shooting from the field with the Washington Wizards.

The Heat are looking to add either of the two small forwards to their starting lineup. This means that we will either see LeBron James playing the power forward position more or we’ll see Dwyane Wade switching from the shooting guard to the point guard spot. After all, the Heat use what Erik Spoelstra calls a “positionless” system, meaning that LeBron James or D-Wade sometimes advance the ball and set up the offense, while on defense we see several unconventional matchups. So, if the Heat sign either Ariza or Luol Deng, they will both be used as starters. If not, will be a huge surprise. 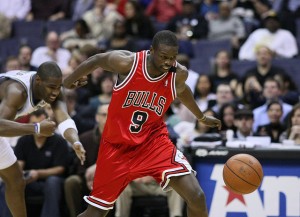 Although either player would instantly upgrade Miami’s chances to stay at the top over the next few seasons and increase their chances to keep this dynasty going, there is one big problem, one which may be the deal breaker.

Luol Deng failed to reach an agreement with the Chicago Bulls and that’s one of the reasons he got traded to Cleveland midway through last season. The truth is that Deng can find a team that can offer him around $12-14 million this summer and there are already several teams interested in his services. Since he is now one of the top free agents available, trailing Carmelo Anthony and LeBron James, teams who are star-hungry are willing to pay big bucks to land him. So, the competition is big and the Miami Heat don’t have much more to throw on the table in order to persuade Deng to come to South Beach other than the chance to win a championship ring. Will this be enough for Deng to leave several millions on the table and join the Heat?

In regards to Trevor Ariza, he is considered as a more realistic target for the Heat. Although he is a very capable, proven veteran, he will come much cheaper than Deng. Ariza will be looking for a long-term deal this summer, around three years with his target annual earnings close to $8 million. The Miami Heat do hold their full mid-level exception, which means they can offer a deal worth $5.3 million per year to each of the two free agents. This may be their best hook.

Of course, if one of the Big Three chooses to sign with another team, then the Heat will go after Ariza and Deng more aggressively. They’ll have more money to spend and they will have to search for their next star, the next leader of their franchise.

The situation is really fluid at the moment. Everything will depend on LeBron James’ Decision V2.0.