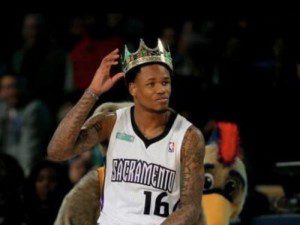 Just over a year ago, in the much-maligned 2013 NBA Draft, the Sacramento Kings managed to catch a break. Ben McLemore, who for months had been in the conversation for the No. 1 overall pick, fell to the seventh pick. About nine months later, McLemore was becoming more comfortable and aggressive – a sign of life and progress after what had thus far been an unforgiving rookie campaign – and his fellow rookie, Ray McCallum, was exploding onto the scene as a starter in Isaiah Thomas’ absence. Most saw it as a difficult enough task to walk away from that draft with one rotation player, but it looked as though the Kings found two of them.

As they enter their second season, though, McLemore and McCallum’s roles – and to some extent, their futures – are in question. Sacramento drafted another shooting guard in June and agreed to terms with a free agent point guard last week, all with the remaining, albeit unlikely, possibility that Thomas will be re-signed.

McLemore came into the league drawing unfair comparisons to Ray Allen, a future Hall of Famer and the greatest shooter ever, and struggled to adjust to the NBA game. At the professional level, McLemore hasn’t been afforded the space to shoot that he was given in college; he’s had to work harder – running off screens, for example – to get breathing room to pull up, something assistant coach Chris Jent, a sharpshooter in his own right, has been helping him with. But McLemore’s passivity, a criticism of his going into the draft that was accentuated on a team with ball-dominant scorers, made his effectiveness inconsistent at best.

By April, McLemore had begun to assert himself and show off the shooting stroke that drew such grandiose NBA comps out of college. But it’s still hard to tell what his potential is, particularly on the Kings.

Sacramento’s selection in last month’s draft played a large part in calling McLemore’s future into question. With the eight pick, the Kings selected Nik Stauskas out of Michigan. Stauskas has some ancillary skills in his repertoire, but he was brought in for shooting above all else.

He’s a 6-foot-6 sharpshooter with some athleticism to boot. He has a decent handle and vision, but I’m dubious of Stauskas’ ability to play any meaningful time at the point; he was selected to play shooting guard. He’s a two guard whose top priority is to spread the floor and play off the ball. When he’s on the floor, Stauskas will most likely play a role similar to McLemore’s last season.

In a way, Stauskas and McLemore’s skills make one of them redundant. Of course it will take seeing what he does against stiff competition to know for sure, but Stauskas seems like the better shooter – at least when both came out of college. If he is in fact a better shooter, and that is the priority of the Kings’ shooting guard, does he get more playing time than McLemore? What does that mean for McLemore’s future?

Much of this still needs to be played out, but the selection seems like it’s made McLemore expendable. He didn’t exactly flourish in his rookie season – which doesn’t justify giving up on him, but since he’s more of a known commodity the Kings would likely part with him before Stauskas, if either of them. McLemore’s already been linked to trade rumors involving Sacramento, so it’s not crazy to think the Kings would use him as a trade chip, especially since they’ve already brought in a young shooter that could replace him.

McLemore’s not alone in potentially facing a developmental stall in Sacramento’s backcourt. McCallum, selected 36th in the 2013 draft, was shuttled back and forth between the Kings and their D-League affiliate, the Reno Bighorns, throughout the first half of the season. By April, though, he was getting his chance and putting up some prolific, if not exhaustive, performances. McCallum’s time at the end of the bench and in the D-League seemed to be paying off by season’s end; he established himself as a legitimate option at the point.

Last week, with Thomas’ restricted free agency yet to be resolved, the Kings signed Darren Collison, Chis Paul’s understudy last season in Los Angeles. Collison has bounced around the league since being drafted by New Orleans in 2009. Despite failing to find a home in the NBA thus far, Collison has proven to be a capable defender and floor general.

But even though Collison has started over 250 games in his career, he’s not exactly an enticing starting point guard talent in a league bursting with them. He’s vanilla; you know what you’re going to get with Collison and it’s not bad, but it’s not going to be great either. (Thomas, for example, has proven to be a much more dynamic presence, but the Kings seem insistent that he’s not a starter.)

McCallum had a small sample size last season, but in the significant playing time he received he seemed about as capable as Collison, and perhaps destined for greater things. The Kings can still re-sign Thomas, however unlikely, which would really throw a wrench into McCallum’s development. But even so, it seems strange to bring in Collison as a starter when McCallum’s progression suggested he’d be on about the same level soon if he wasn’t already.

It’s been bandied about that Collison was brought because of his “pass-first” approach, but the difference he makes in setting up teammates is debatable. Of course there’s more to ball movement than the final pass that registers an assist, but it’s worth noting that Collison’s assist rate (21.9 percent) was just ahead of McCallum’s (21 percent) and far behind Thomas’ (32.2 percent).

Depending on your view of Thomas (for some reason his impact and credentials as a starting point guard are still up for debate), it makes sense for McCallum to play his backup, but less so to be spelling Collison. Yet Collison was brought in to be the starter, a directive that will keep McCallum on the bench for who-knows-how-long. If the Kings were going to give the reins of their starting unit to a top-tier backup instead of Thomas, they may have overlooked their own roster to fill the role, perhaps unnecessarily stunting McCallum’s growth.

The free agent moratorium began today, which means there’s bound to be plenty of roster movement over the next week. The Kings’ moves this offseason have caused some head scratching, but there’s surely something in the works that has yet to be revealed that will provide clarity.

Until that happens, though – if it happens at all – it’s hard to look at Sacramento’s roster and recent pick-ups without thinking McLemore and McCallum have been pushed to the side after they made the Kings winners in a draft with few of them.