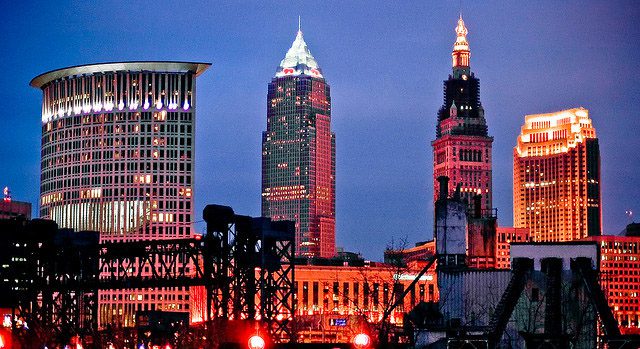 You don’t really get how long fifty years is unless you’ve been in pain the entire time. You don’t have to think about it too long to understand how different the world is from 1964 to 2014. Let me put it in perspective if I may. Around the time The Cleveland Browns won the last of Cleveland’s titles, a guy named Cassius Clay won his first title and went on to have a pretty decent career and changing our country’s cultural landscape along the way.

Even if you weren’t alive to see all the devastating foibles of our sports teams, it doesn’t matter because you inherit them. Pessimism and embarrassment are hereditary, and unless you’re from here, you just don’t understand. The Drive, The Shot, and The Strike are like a three-headed jackal that haunts our town’s collective consciousness. “They’re just gonna blow it anyway” is what we say to protect ourselves from the inevitable. Do you know what it feels like to get your heart ripped out through your urethra? Watch Michael Jordan hit that shot over Craig Ehlo. That’s what happens when you hope for good things.

When Lebron James was on the Cleveland Cavaliers, you didn’t really have to worry about those things. You could watch a game and pretty much know that you were going to crush the opposition. He was the one hitting the shots at the end, and tearing the heart out of everyone that was in the way. It felt great. Around here, you hear old stories about how dominant Jim Brown was, and how graceful Bob Feller was, but that’s all they were… stories. Stories told in black and white videos, and old people re-living the glory days (nostalgia makes me sick), but when Lebron was here we were all witnesses.

Then The King left, and the jackal grew another head. The “Decision” to leave just reaffirmed that nothing good can happen here. It was also a lesson in idolatry. We invested seven years into the boy king; they say “most young kings get their heads cut off” for a reason.

The four years with the Miami Heat were bittersweet. While it hurt to see LeBron win, seeing Kyrie Irving shine has been a breath of fresh air. I feel as if in the last few days since James made his announcement that everything Uncle Drew has done for us has been pushed aside a little bit. He should get his due for showing us that basketball is still being played with or without LeBron James. There’s nobody in Cleveland sports history that had more of a burden put on them than Kyrie. From the beginning he became the face of a franchise torn apart by his predecessor, and performed beyond valiantly.

This weekend as I was walking around Downtown Cleveland I could feel the excitement people had for the news of LeBron returning home to save us from the basketball hell that we’ve been trapped in since 2010. It may be sad that we celebrated transactions like we just won a playoff game, but unless you’re from here, you just don’t understand. While everyone was celebrating, and enjoying themselves, I just kept thinking about how will Lebron James be remembered in the annals of American Sports History?

I won’t remember him as a saintly or messianic role model the way I hear people talk about Michael Jordan, Muhammad Ali, or Babe Ruth, but as a human being. One who was flawed, who made mistakes, who broke millions of hearts and then put them back together again. A human being who carried the weight of a city and its sports history on his back for seven years, put it down because it was too heavy, and picked it back up again. Not because it was the easy thing to do, but because it was the hard thing to do.