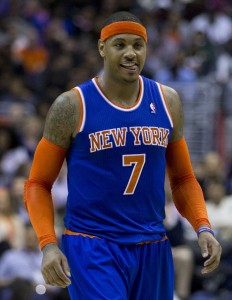 A day after LeBron James’ dramatic return to Cleveland, Carmelo Anthony made up his mind. While many thought that he would abandon the New York ship to attempt to play for a winner, Anthony decided to return to the Knicks.

But was it the right decision for Melo?

When Carmelo Anthony formally opted out of his New York Knicks contract last month, his agent Leon Rose made this statement via NYDailyNews.com on June 23, 2014:

Carmelo loves being a Knick, he loves the city and the fans. At this stage of his career he just wants to explore his options.

What is there not to love about NY anyway? It’s one of the biggest stages in basketball and has some of the best fans in the world. Everybody loves New York, so why wouldn’t a Brooklyn born kid like Carmelo Anthony want to stay?

That zero statistic was the reason Anthony hinted during the 2013-14 season that he would opt out of his contract, so he could have an opportunity to win an NBA title.

For Anthony, exploring options this summer was listening to offers from Chicago, Houston, Dallas, and the Los Amgeles Lakers. It even included flirting with the opportunity to join the Big Three in Miami or being traded to Cleveland to join James there. However in the end, none of those happened. And while he wanted to be a part of a high level team, he instead chose to get a high level pay check.

Money In the Bank

To say that Carmelo Anthony cashed in would be an understatement. According to ESPN.com on July 14, 2014, here is a peek of the contract’s monetary details:

The contract will be for more than $122 million, but less than the five-year, $129 million max figure, a source told ESPN The Magazine’s Chris Broussard on Saturday.

The key words there are “more than $122 million, but less than … $129,” because this is crucial in the New York Knicks’ plan of building a winner around Anthony. As CBSSports.com reported on July 14, 2014, here is the “discount” that Anthony gave Phil Jackson:

Jackson confirmed The Post’s reports Anthony structured the deal to give the Knicks more cap space in 2015. It is believed he didn’t take his annual 7.5 percent raise in Year 2 and may have taken a tiny pay decrease. Under collective bargaining agreement rules, a player can receive as high as a 7.5 percent pay raise annually.Anthony’s sacrifice in Year 2 likely opens up about $2 million more in cap space for 2015, but the rest of his annual wages suffer by not taking the raise.

If the 2015 discount is $2 million, then that’s not really much of a figure to add to their “wiggle room” for getting top tier free agents next summer. Also, that’s a far cry from the discount which Tim Duncan and Dirk Nowitzki gifted their respective teams earlier this summer. But hey, a discount is a discount, and if this is what Anthony meant by taking a pay cut, then it is what it is.

There’s one point worth noting here. The Chicago Bulls’ offer was reported to be $75 million, while the Lakers dangled $96 million to lure away Carmelo. So from a financial point of view, it wasn’t difficult to choose New York’s offer.

Believing In the Zen Master

The main piece of this equation is the idea that Anthony believes in Phil Jackson. He should. Nearly everything the Zen Master has touched in the NBA has literally turned to gold.Even though Jackson is going into his first season as a basketball executive, he knows how to build a team the right way. He’s already started doing so with multiple moves this offseason; mainly the hiring of Derek Fisher as the team’s new head coach. Although Jackson won’t be yelling out play calls from the front office, you know he’ll have his pulse on everything that Fisher does on the court in practice and in games.

Phil Jackson’s first order of battle was to replace Mike Woodson. Then Jackson traded away problem guard Raymond Felton, and packaged him alongside Tyson Chandler. Dallas gave them Jose Calderon, Samuel Dalembert, Shane Larkin, Wayne Ellington, and two draft picks. However, if we thought that Jackson was just getting started, those were probably his last moves of this offseason. According to NewsDay.com on July 13, 2014, Jackson said:

I want to be fiscally responsible. We’ve been a taxpayer team for a little bit and we want to limit that. So we’re not just going to foolishly throw money away because it’s available to us to load up. We want to make an appropriate move that brings our team forward.

If we simplify that, it means shopping’s over, it’s time to get to business.

The Knicks still have the $3.2 million MLE and the $3.6 million trade exception they got in the Chandler deal, but other than that, they only have the minimum contracts to work with.

Jackson tried to trade away Amare Stoudemire’s $23.4 million salary and Andrea Bargnani’s $11.5 million remaining contracts. However, while teams like the Philadelphia 76ers were willing to take those contracts in, Phil was adamant in not parting with Iman Shumpert or Tim Hardaway Jr., which essentially squashed the deal.

So without cap space and viable trade options, Jackson’s going to gut it out with the same core next season. That being said, this team is not bad, considering that Amare has shown that he can still score, Bargnani can still shoot, and J.R. Smith is streaky, at least in theory. Remember that this core finished 54-28 in 2012-13 before falling out of grace with a 37-45 record this past season.

The current Knicks lineup is loaded with guards and wings, so Jackson might just want to make minor trades and add a couple of bigs, then go to war. This is definitely not our idea of “building a winner around Carmelo,” which both he and Phil talked about before the summer, but then Jackson never said it was happening this year.

Even when the Zen Master first stepped in, he was talking about 2015 when Amare and Bargnani will be off the books. As reported by the NYPost.com on April 12, 2014, Jackson said:

Not a great crop coming this particular year. But [2015] does have a group of guys together. Steve and I are going to work to manage the roster, our financials, so we can have an impact in that area.

The Knicks have just signed Carmelo to a five-year deal. Jackson has four more years to fulfill his promise of building a winner around his cornerstone and winning the Knicks’ first title since 1973.

Even though some people don’t buy this idea, the most important thing for NY is that Melo does. Carmelo Anthony just took a nine-figure leap of faith with Jackson.

As Carmelo turns into his 30s, his window of opportunity will slowly be closing down on him. It was his prerogative to explore his options before making this all-important decision, but then there is no guarantee that Derrick Rose’s knees will hold up in Chicago, there may be no room for two huge egos in Los Angeles, and there was no guarantee that the double-barreled offense of James Harden and Carmelo Anthony could work. Also, if Melo went to Miami and LeBron left, he would’ve found out why James cramped in Game 1 of the 2014 NBA Finals. So why would he risk Lala and his kid going elsewhere?

As Melo said in a recent interview with Vice Sports, as reported by Yahoo.com on June 23, 2014:

Carmelo Anthony wasn’t just looking at next season when he made his decision, he was looking beyond. He was looking at the big picture with the big contract in mind, nothing more and nothing less.

Money is guaranteed, championships are not. In the NBA, where the competition is getting better by the minute, Carmelo Anthony made the right decision in choosing his future over everything else. Now that his family is secured, it’s time to play and win, whatever that means next season.

As for the Knicks? Jackson promised to build a winner around Carmelo Anthony, but it’s definitely not going to be next season.