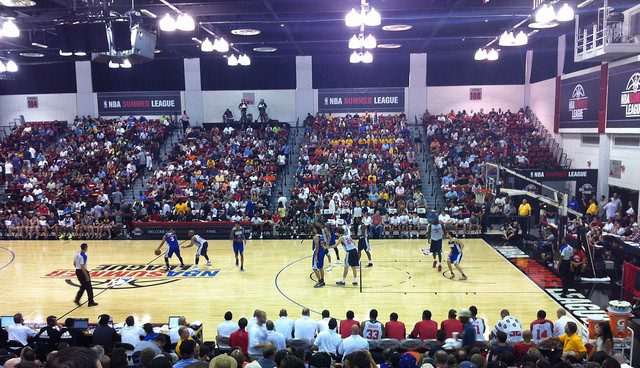 With a number of established Sacramento Kings players on the Summer League squad, it’s no surprise that the team has overcome the Washington Wizards to reach the championship game and will leave Las Vegas with a better understanding of what lies ahead for the 2014-15 regular season.

The combination of relatively experienced forwards in Quincy Acy and Derrick Williams has been a large factor in the team’s success, as both players have been factors in late-game situations to close out matchups and give Ty Corbin’s summer team some much needed leadership.

Acy has averaged 12.6 points and 7 rebounds per game, as his consistent trips to the free-throw line and aggressive approach to the glass has been a key to Sacramento’s success.

Williams’ growth and ability to lead his team down the stretch has been very apparent, and his 12.3 points per game has taken offensive pressure off of the team’s guards.

With such inexperience in the collection of rookies and young players, the Kings have benefited greatly in that the organization’s front-men don’t take Summer League lightly. Vivek Ranadivé, the Kings’ majority owner, has been seen numerous times sitting court side with DeMarcus Cousins as the two watch the team develop.

It may be brushed aside as unimportant, but the presence of Sacramento’s front office and involved players is clearly appreciated by players still under a rookie contract, such as Ben McLemore and Ray McCallum.

Considering the fact that some team owners are nowhere to be found, heli-skiing in mountains and leaking embarrassing remarks to the media, Ranadivé’s mere presence is surely felt.

Kings general manager Pete D’Alessandro has spoken of the development of young players even before Summer League, as prospects worked out for the Kings to earn a spot on the temporary squad.

Even if it means revisiting some of the forgotten young talents in the NBA such as MarShon Brooks, D’Alessandro is willing to do what it takes to build the Kings’ roster.

Doing so may be paying off for the Kings, as multiple players have elevated their standing among the young members of the league.

McLemore, for example, has shown flashes of what his full potential as a basketball player is. He’s begun to hit transition three-pointers and has played smarter with the ball, demonstrating that he may be deserving of a key role in the Kings’ lineup.

The front office’s willingness to take such chances and put actual effort into Summer League has also presented the rise of Brooks, which has seemingly gifted the team a possible backup shooting guard where before there was only McLemore and Nik Stauskas.

It’s also put the Kings into a championship game today against the Houston Rockets, an accomplishment more reflective of the team’s acknowledgement of Summer League’s importance than anything else.

All too often this period of preseason basketball is forgotten, and wrongly so. Putting all possible assets onto a Summer League squad may be taken as a way for a bad team to appear as if future success is looming, but the Kings’ recognition of its importance has raised a number of possibilities and assurances for the team.

The Kings have been able to find faith in players like Acy and Williams. Younger members such as McLemore and Stauskas have given the team further understanding of its rotation come regular season, and the period in Las Vegas has been as educational for Sacramento’s ownership and management as it has been reassuring to players like Brooks, who may have played his way into an NBA contract.

The Kings will end an educational period of basketball against Houston, then head back to Sacramento with increased certainty in its young, developing players.