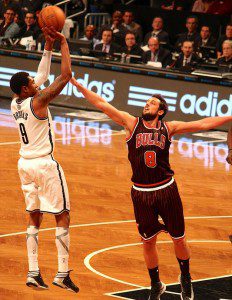 No matter how unimportant the NBA Summer League games may be compared to the regular season and onward, the Sacramento Kings have gained confidence in their young, developing core.

Obviously, the first few matchups of Summer League had every Kings fan keeping a close eye on Nik Stauskas, watching how he played and matched up with NBA-level talent. Thus far, he has impressed and seemingly validated his eighth overall selection. He’s shot the ball well, as many expected him to do even with an increased difficulty in a professional league, and his pairing with Ben McLemore has been more than promising; it raises the possibility of a long-term career in Sacramento for both players.

The Sacramento backcourt as a whole has been pleasantly surprising. That’s not to say any of these young players have been particularly bad in the past, but with the echoes of Jimmer Fredette’s uneventful career with the Kings and McLemore’s rookie season struggles, it wouldn’t have been out of the question for these young guards to fall apart both individually and as a unit.

In fact, McLemore and Stauskas may be the bright spots of Sacramento’s Summer League roster. Both guards have averaged more minutes per game than any other Kings player, even though they play the same position. They’ve shown an ability to be on the floor in concert, with McLemore taking an increased defensive responsibility and Stauskas shooting the lights out every game – 50 percent from long range so far.

Equally impressive, however, has been the recent play of MarShon Brooks. He joined Sacramento’s Las Vegas roster as a guard likely to be overshadowed by Stauskas, McLemore and Ray McCallum, but he’s proved to be of worth in recent matchups.

In the 2013-14 season alone, Brooks had stints with three different NBA franchises and averaged under 13 minutes per game on each team. With his three-year career already filled with the uncertainties of a borderline NBA talent, Brooks is looking to make Sacramento his basketball home.

He’s had to impress the Kings in Summer League, and he has.

In the team’s most recent matchup against the Minnesota Timberwolves, Brooks put up 19 points and four rebounds in just 18 minutes of play. It also doesn’t hurt his case that Kings general manager Pete D’Alessandro was in attendance, and watched Brooks mesh well with McCallum and other Kings guards.

Brooks may not have attracted much attention from the Kings’ front office before the Las Vegas Summer League, but his play as of late has shown that he can provide a steady backup for both Stauskas and McLemore, who will claim a majority of minutes when the regular season comes around.

Having another guard with a chip on his shoulder and a necessity to prove himself fits right into the Kings’ backcourt situation. Every guard on the team has something to prove.

Darren Collison will be returning to a starting role. McCallum, who was a second round pick last year, used Summer League and took advantage of an Isaiah Thomas injury to solidify his role.

At the shooting guard position, both McLemore and Stauskas have Kings fans speculating and watching closely. Again, with the downfall of Fredette still painfully evident for this team, both lottery picks have been looking to gain the trust of the Kings front office.

Then there is Brooks. After bouncing around from team to team for a frustrating first few years in the league, he’s landed in a position which may earn him another NBA contract if he keeps playing smart basketball. He is like the rest of the young Kings backcourt players, willing to do what’s needed to stay afloat in the league.

In Brooks’ impressive outing against the Timberwolves, McLemore put up 22 points of his own, as the two played off McCallum’s five assists.

This mixture of guards should not be taken lightly. With such young, undeveloped talent between both Brooks and McCallum, and such high-powered shooting potential in Stauskas and McLemore, this may be a situation the Kings look to hold onto for more than another year or two. Every one of these guards has an ability to progress and get better, and they play well together.

Brooks is not currently signed with the Kings – or any team for that matter – but his play as of late will likely land him an NBA contract in the near future. Even with his past inconsistencies and downfalls, he has clearly shown that he fits well with other Kings backcourt players.

Sacramento will likely look to sign Brooks as a backup for the shooting guard position, as Stauskas will still be looked upon to contribute some minutes at the one.

An undeveloped group of guards may be exactly what the Kings are looking for. The team already has Collison locked up for three years, and will likely exercise the team-option on McLemore at the end of the 2014-15 season.

Stauskas’ rookie contract will, too, provide the team with an option in 2016, and if this collection of guards plays together the way they’ve shown in recent Summer League games, the shooting guard combination of McLemore, Stauskas and possibly Brooks could be together long-term.

Brooks has proven his worth to the Sacramento Kings, and may be signed by the team in the near future to complete the backcourt.