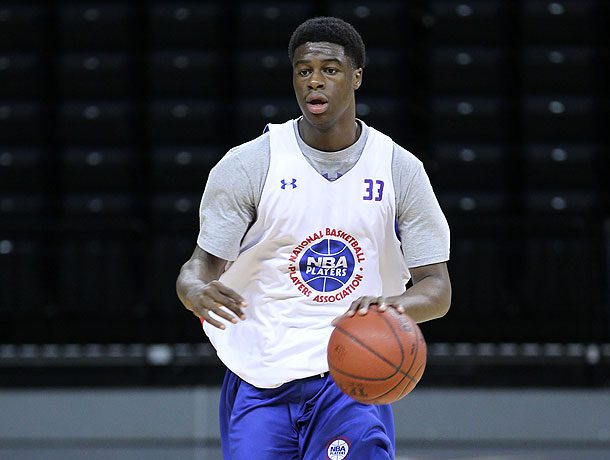 Class of 2014 star recruit Emmanuel Mudiay, 18, has signed a one-year deal worth $1.2 million with the Guangdong Southern Tigers of the China Basketball Association. Muiday’s decision came after learning the NCAA would consider him ineligible to play basketball for Southern Methodist University (coached by the legendary Larry Brown) because of academic issues with Primp Prep, a prep school in the Dallas-Fort Worth area co-founded by Deion “Primetime” Sanders. CBS Sports’ Gary Parrish broke down this confusion in a succinct manner:

The charter school — co-founded by NFL Hall of Famer Deion “Prime Time” Sanders, hence the name “Prime Prep” — is facing closure due to improper financial management and a failure to comply with the state’s education code, according to the Texas Education Agency. In other words, it might soon cease to exist. But Prime Prep has existed since 2012 — although, for purposes of qualifying academically to compete at an NCAA institution, Prime Prep has never been considered a safe route, mostly because it has, according to the NCAA, forever “been under an extended evaluation period to determine if it meets the academic requirements for NCAA cleared status.”

Translation: Attend Prime Prep at your own risk.

Long story short, Mudiay opted to get paid handsomely for his services rather than run the risk becoming the victim of Prime Prep’s institutional failures. Only two scenarios were likely to occur if he stayed at SMU and both suck.

Let’s be honest: Mudiay was going to become eligible one way or another. Big 12 commissioner Bob Bowlsby said verbatim that “cheating pays.” Bowlsby gave no names or examples but the enforcement rules are numerous and convoluted. Players who previously had NCAA eligbility issues at Prime Prep were given waivers through the Eligibility Center. That’s not “cheating.” It’s just finding a permissible way around the rules as long as relationships exists between a player’s camp and NCAA officials.

The funniest thing about college sports is that many righteously claim that getting a free education is more important than getting a six-figure contract overseas. The most expensive out-of-state tuition rarely exceed $50,000 per year. Mudiay is earning $1.2 million in one year. He could afford to attend any university that accepted his grades many, many times with that kind of money. Overseas programs are offered to high school students so they may have a richer view of the world, an international experience so to speak, but this is frowned upon with American high school basketball recruits because it is assumed they will be unable to adjust to a culture shock. That’s insulting to everyone’s intelligence, and is an indictment of how these recruits (often young black men) are viewed by mass media and the public at large.

As Adam Silver continues to push for a higher age limit, from 19 to 20, expect to see more recruits consider overseas options. Dante Exum of Australia was drafted fifth overall in the 2014 NBA draft without much available footage of his game, and despite not playing against high level competition in his country. Scouts obsess over potential. They don’t care if you earned the SEC Player of the Year award or won the national championship. The NCAA is going to crumple once everyone collectively realizes that it’s 2014, and professional leagues outside of the United States are anxious to pay young players in excess of $1 million even if they don’t graduate high school. What can the NBA do about it? Probably nothing.