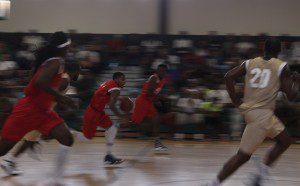 The Atlanta Entertainment Basketball League (AEBL) ended their regular season this past weekend with full slate of games on both Saturday and Sunday.

Saturday kicked off with a battle of the winless as Land of Flyy took on Blacktop ATL. Neither team has been able to notch a win under their belt. So someone was going to walk away with a win guaranteed.

A competitive game, Land of Flyy was able to pull away towards the end with the help of player of the game Brandon Reed.

The second game of the day featured perhaps one of the best plays of the year. 2-3 Court Cred took on 2-3 Grind Hard. CC was missing stars players Jamario Moon and Brent Petway. Picking up the slack was former Clemson standout Brandon Robinson.

Robinson led Court Cred to an 84-62 win. Brandon had 31 points and 6 boards for Court Cred, but everybody walked away talking about this play below.

Saturday ended with the scrappy HDMD squad taking on the talented C.T.C. team. C.T.C. and HDMD were both talented enough to challenge the top 4 teams in the league. Week-to-week, neither squad was able to put together a string of wins that would put them among the upper echelon of teams. 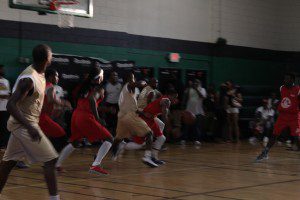 From the opening tip-off, both teams went hard showing that they could easily match-up with Gold Gang, Uptown Sounds, Good Life or Street Execs.

The key to HDMD success all season has been guard Ben Clahar. He stepped up big again today. Clahar led his squad to an end of the season 65-59 win with 18 points, 4 assists, 5 rebounds and 1 steal.

HDMD ended the season with a 3-3 record.

Sunday was everything that it was hyped up to be.

The day started off with Lou Williams and his Uptown Sounds team taking on the Good Life Music Group team. Last week, Lou snatched the single-game scoring record from GLMG’s Cam Tatum when he exploded for 50 points.

From the opening tip, everyone was looking to see if Tatum and Williams were going to try to go for 60 points and set a new single season record.

Good Life Music Group boasted one of the best scoring duos in Cam Tatum and Chris Allen. They added Philadelphia Sixers forward Jordan Mcrae to the mix this afternoon.

The game everyone was waiting for lived up to all the hype!

Gold Gang stars Jamerio Davidson, Paul Delany III and Lil D have made GG look like the most dominant team in the league.

Their early season scrimmage against Street Execs showed that.

Street Execs have been playing at a high level ever since that early season loss. After knocking down everyone in their path, they were ready to take on Gold Gang again.

Before the game started you could feel the tension in the air from both teams. Neither squad wanted to take a loss today.

The game started off with Street Execs racing out to a small lead that they carried all the way to halftime. Gold Gang is a tough out, especially when big man Davidson is on the court. His ability to stretch the floor on offense and man the post on defense makes Gold Gang almost unstoppable.

Street Execs had the likes of Kevin Ware and player of the game Markeith “Tee” Cummings who didn’t back down from Gold Gang and their offense firepower at all.

Neither team got to more than a 5 lead over the other through out the game. So as we came down to the 4th quarter and the game was knotted up at 54, everybody knew that this game was going to end in a dramatic fashion.

Both teams traded buckets all the way down to the last 51 seconds of the game. That’s when things got really interesting.

After Delany hit what many thought was the game-winning fade away jumper for Gold Gang, Tee Cummings came back and hit a miracle three-pointer that was later called a two, with 0.6 seconds to send the game in overtime!

In OT, Gold Gang ran out of gas. Street Execs took it to them at every chance they got. Cummings earned his player of the game tag in the last quarter and in OT.

Cummings ended with 21 Points, 19 in 2nd half to help Street Execs avenge an early season loss to Gold Gang and end the regular season as the #1 team in the league.