At the start of the 2019-20 season, the Los Angeles Clippers looked like one of the teams to beat. They looked like a contender that could rival other Western Conference teams such as the Los Angeles Lakers and the Eastern Conference favorite Milwaukee Bucks. Of course, things didn’t go their way last season, as the Clippers were knocked out of the playoffs by the Denver Nuggets in seven games. Now, after Kawhi Leonard and Paul George‘s first season together and their underwhelming playoff performances, one must ask, will this be the Clippers season?

Last season, things looked promising for the Clippers. The addition of star forwards Leonard and George made headlines and put the league on notice. To say the least, the signing of Kawhi Leonard was especially huge. Leonard was fresh off a historic championship win, as he led the Raptors to their first title in franchise history. He played one season with Toronto, as they acquired him in a trade before the 2018-19 season. He won his second career title and second Finals MVP, then returned to the Western Conference after signing a three-year deal with the Clippers.

The Clippers brought in some help for Kawhi as they sent  Shai Gilgeous-Alexander, Danilo Gallinari, and multiple draft picks to the Oklahoma City Thunder. They received two-way star Paul George in exchange. After two seasons with the Thunder, George landed in Los Angeles to form a star-studded duo with Kawhi. Fun fact, the Clippers signed Leonard and traded for George only a day apart; July 5th and 6th respectively. However, the duo wouldn’t play together until late November because a shoulder surgery pushed back George’s season debut to November 14. 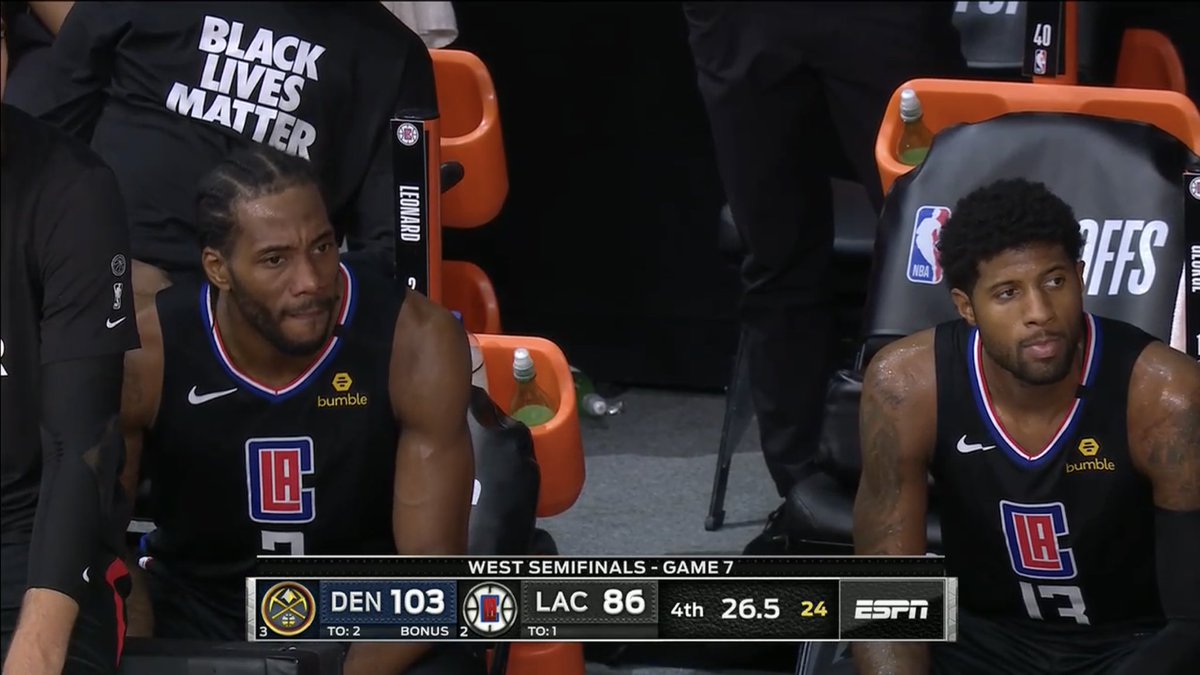 When the duo finally got to play together, they earned an overtime victory against the formidable Boston Celtics. They combined for 42 points and made a strong impression on the rest of the league. As the season progressed, the Clippers managed to stay towards the top of the conference. The Clippers were second in the West before the season’s suspension and maintained their standing in the bubble. This led to a first-round matchup with the Dallas Mavericks. The Mavericks put up a fight, but the Clippers won 4-2 to advance to the second round. Then, the Clippers had a 3-1 lead over the Nuggets in the second round but lost the series in Game 7. You can blame Kawhi shooting 6/22 in that game. You can blame Paul George shooting 39% from the field in both series. Don’t forget him shooting 4/16 from the field and 2/11 from deep in Game 7. It doesn’t matter. The Denver Nuggets were the better team that day.

The possibility of a Los Angeles Western Conference Finals came to an end, and the Clippers’ cross-town rivals Lakers beat the Nuggets in five games and ultimately won the NBA championship. Now, the Lakers are set to defend their title, while the Clippers hope to get their first. But, it won’t be easy.

So far, the Clippers have had a quiet offseason. They traded for guard Luke Kennard in a three-team deal. The Clippers gave up Landry Shamet and Rodney McGruder to receive Kennard and multiple second-round picks. On top of this trade, the Clippers signed Serge Ibaka and re-signed Marcus Morris. But they also suffered a big loss. The Clippers lost the reigning Sixth Man of the Year Montrezl Harrell to the Lakers (of all teams). Harrell, along with Lou Williams, played a big role off the Clippers bench. He averaged 18.6 points (a career-high) and 7.1 rebounds (also a career-high) last season. The loss will impact their upcoming season, and it will be interesting to see how they adapt. The signing of Ibaka definitely helps.

The 2020-21 season will be here soon, and the Clippers are on a mission. They want to contend and hopefully be the last team standing come July. But, they have a tough road ahead of them. Teams are getting better, while the Clippers have mostly stood pat. So, it will be interesting. Is this the Clippers year? It’s hard to tell. With the loss of Harrell, the Lakers offseason improvements, a new coach in town, and failing to acquire Chris Paul, they have obstacles ahead of them. If they overcame their obstacles, it makes for a good story in the end. If not, they’ll be just another contender in history who couldn’t get over the hump. Time will tell. Either way, it will be fun to watch what happens.