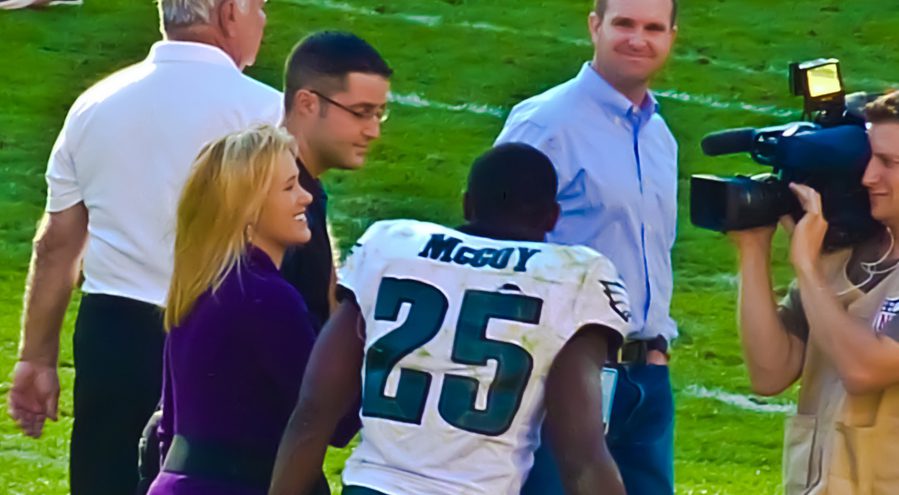 We all know who No. 25 is in the City of Brotherly Love. LeSean McCoy AKA “Shady” is a name that speaks for itself. He was a man of legend during the 2013 NFL season, with arguably the best year of any running back in the NFL.

Leading the league last year in rushing with a whopping 1,607 yards, Shady is in a category all his own. Outranking his competitors by hundreds of yards, he perched himself up above the likes of Adrian Peterson, Jamaal Charles, Marshawn Lynch, and countless others.

But after a scare against the Pittsburgh Steelers this past Thursday, his fantasy owners were on the edge of their seats. McCoy took a helmet to the hand that forced him to exit the game and head to the locker room for an x-ray that, thankfully, returned negative results. Luckily, the injury is nothing too serious, with only a sprain and some moderate soreness. He should be ready to go Week 1 of the regular season.

But that shouldn’t be the only cause for concern to put Shady’s fantasy owners a little on edge. There’s a new kid in town courtesy of a draft day trade with the New Orleans Saints.

Darren Sproles, a seasoned vet who started his career with the San Diego Chargers, then went on to New Orleans after his old quarterback, Drew Brees, campaigned for his transfer. In his nine seasons in the league, Sproles has certainly made a name for himself, amassing 15,504 total yards rushing and receiving. Eagles coach Chip Kelly would be crazy not to capitalize on his versatility and strengths.

Asked about the offseason trade, Brees was quoted as saying, “you only see a Darren Sproles type of player come around once in your career.” That just goes to show you that McCoy will be sharing carries with someone. Not necessarily splitting them, as he’s still the big man in town, but certainly not getting all the reps; nor the goal line carries.

Then there’s the question of the quarterback swap with the New York Jets that’s taken place (Michael Vick for Mark Sanchez). Not to mention the absence of now-rival DeSean Jackson, who took his skills to the Washington Redskins; and the healthy Eagles star wideout Jeremy Maclin, who’s back in action after recovering from his 2013 preseason ACL tear.

With Vick constantly out in 2013 due to injury, Nick Foles stepped up to the plate in a big way. Foles threw for an impressive 30 touchdowns last year, with a record seven against a horrible Oakland Raiders defense in Week 9, and an almost unthinkable two interceptions. Those numbers will not repeat themselves in the 2014 season. A season has gone by, and teams have had an offseason to scrutinize all of the Arizona phenom’s moves. Defenses will be ready this time around. Don’t expect to see those magical numbers mirrored again.

Will McCoy be able to keep up his No. 1 spot with the changes outside of Philadelphia as well?

Peterson is healthy again. Charles is back at it full-speed in Kansas City. Lynch’s offseason holdout scare proved to him what he wanted and it’s raining Skittles in Seattle for the 2013 Super Bowl champ. The Chicago Bears’ Matt Forte was not too far behind McCoy last season, scratching at the itch to take the top spot. Alfred Morris has a healthy Robert Griffin III back.

Bottom line: If you have the opportunity in your fantasy football draft to pick up LeSean McCoy, take him. That’s obvious and goes without saying. You would be stupid not to. But can you expect his 2013 season to duplicate itself, living up to its own legacy, with all of the changes that have taken place – not only in Philly, but around the league? This girl thinks not.